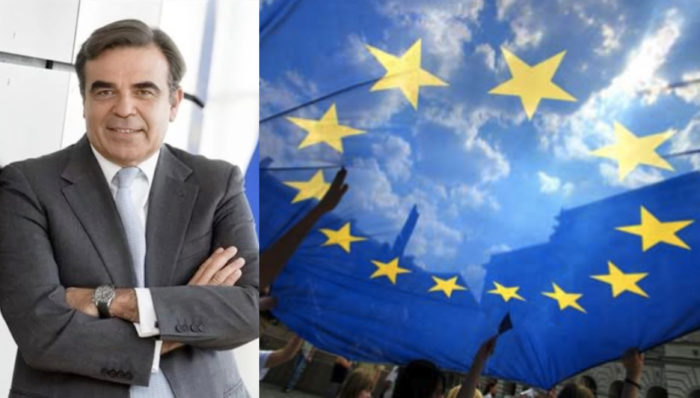 When it was announced on Tuesday that Greece will be among the few EU member states holding one of the Vice Presidencies of the next European Commission, nearly everyone across Greece’s political spectrum was pleased.
The appointment marks the first time in history that the country would hold such a prestigious position in the EU.
However, the days that followed drew unprecedented criticism for the new position of Margaritis Schinas, the next Greek European Commissioner.
The negative reaction was not focused in any way on Schinas himself, who is regarded as among the most experienced and competent European officials, but rather the name of his newly-created portfolio.
According to Ursula von der Leyen, the President-elect of the European Commission, Schinas would be the next Vice President for the ”Protection of the European Way of Life.”
This unique phrase immediately drew the attention of many.
Schinas will be coordinating a total of four crucial portfolios in the next Commission, which is the executive branch of the EU and the equivalent of a national government.
The portfolios of Migration, Security, Employment and Education, along with their respective Commissioners, will all be under the leadership of Vice President Schinas.
So far, so good.
The negative reactions were spurred by the fact that von der Leyen decided to grant the new Vice President responsibilities for protecting the ”European way of life.”
MEPs and politicians from a large part of the European political spectrum, as well as political analysts, have already expressed distaste for the title in a number of very negative remarks seen on social media.

Calling the European Commission migration portfolio "protecting our way of life" is deeply insulting. And if this is migration what will the Home Affairs Commissioner do? I sense confusion with these weird and odd titles. https://t.co/Mk2yAoWYUt

Claude Moraes, a prominent member of the British Labour Party and an MEP tweeted: ”Calling the European Commission migration portfolio ‘protecting our way of life’ is deeply insulting. And if this is migration what will the Home Affairs Commissioner do? I sense confusion with these weird and odd titles.”
Member of the European Parliament Damien Careme, representing the Greens, went much further, calling the name of Schinas’ new portfolio ”an abomination.”

New team of Commissioners looks competent. But I don’t understand why @vonderleyen has linked migration to “protecting the European way of life”. We need strict & fair immigration rules, but this Commission should stay far away from Orban’s rhetoric! She has to rectify this ASAP. https://t.co/mwzcaAXun5

Even Guy Verhofstadt, the Brexit coordinator on behalf of the European Parliament, condemned von der Leyen’s decision to use such a term to describe Schinas’ responsibilities. Verhofstadt is also a prominent member of the ”Renew Europe” party, the strongest centrist Liberal party in the EU.

This appropriation of the rhetoric of the far right must endhttps://t.co/Ia6vTXZa8s

Critics suggest that by naming the portfolios of Migration, Education, Security, and Employment part of the ”Protection of the European way of life,” the new Commission is adopting the rhetoric of the far-right.
To some, the phrase appears to reinforce the deeply-rooted belief of Europe’s right-wing politicians that refugees and migrants are threatening the traditional values of Christian Europe.
Right-wing leaders, such as Hungary’s controversial Prime Minister Victor Orban, are known for using similar phrases, which has caused widespread negative reaction to Hungary’s national leadership for years across the EU.
It is noted that MEPs have the right to block the candidacy of new European Union commissioners and vice presidents.
Considering the broadly-based negative reactions that Schinas’ new Vice-Presidential title has already caused, it is highly likely that his portfolio may have a change of title.
If not, Schinas could unfortunately find it difficult to attract a majority of supporters in the European Parliament, something that could put his very candidacy at risk.