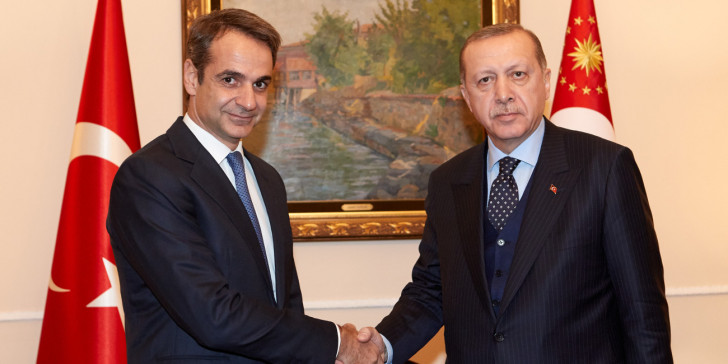 Greek Prime Minister Kyriakos Mitsotakis will meet with Turkish President Recep Tayyip Erdogan on the sidelines of the 74th session of the UN General Assembly which will be held in New York on September 17-30.
The meeting comes at a time of heightened tensions in the Eastern Mediterranean following Turkey’s drilling in Cyprus’ exclusive economic zone (EEZ) and threats to unilaterally re-open the ghost town of Famagusta, in the Turkish-occupied north of the island.
On Sunday, Mitsotakis expressed his readiness to meet Erdogan during a press conference on the sidelines of the Thessaloniki International Fair.
“If Mr Erdogan is ready for a meaningful re-launch in Greek-Turkish relations he should prove it in practice. My intention is to talk, because only then can you find mutually acceptable solutions. I have raised the issue of Turkey’s actions in the Cyprus EEZ in all my international meetings, it is a European issue,” the Greek prime minister said.
Speaking earlier on Tuesday during a visit of Cypriot President Nicos Anastasiades, Mitsotakis vowed that Greece stands in defense of Cyprus’ rights.
The two leaders expressed their stern opposition and concern over Turkey’s illegal actions in the sea and its plans and announcements for the Famagusta area, while they agreed on a common handling in response to illegal Turkish actions.
They also expressed their shared position that Turkey must stop such actions and contribute to creating an appropriate climate for talks.
“The Greek Prime Minister and the President of the Republic of Cyprus reiterated their absolutely willingness to resume the substantive negotiations that will lead to a viable and functional solution for Cyprus without guarantees and foreign troops, based on the international law and in accordance with UN resolutions and treaties, as well as the principles and rules of the European Union,” the joint communique said.

Meet Babis Bizas, the Greek Who Is ‘The World’s Most Traveled Person’