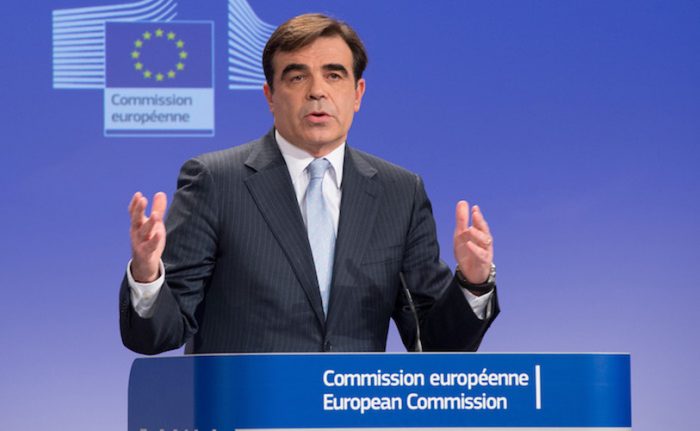 Speculation over the specific portfolio which will be taken on by Greece’s next European Commissioner Margaritis Schinas has intensified over the last several days, with conflicting information coming out of Brussels.
According to information published recently by the Cypriot News Agency, Schinas, the next Greek Commissioner of the European Union, is expected to obtain the European Defense and Space portfolio.
The new EU Commission under Ursula von der Leyen (who is the new chief executive of the EU, the equivalent to a national government) will establish a new post and a new Directorate-General for European Defense as well as the Union’s Space policy.
The new Directorate-General organization will be the equivalent of a national ministry.
According to the same source, Schinas will become the first Commissioner for this post, which is thought to be absolutely crucial for the future of Europe.
However, other sources quoted on Sunday in the Greek media suggest that Greece will maintain the portfolio of Migration, Home Affairs and Citizenship, a post which has been held by Dimitris Avramopoulos since 2014.
The EU has already expressed a strong desire to establish a European military doctrine, by gradually shaping its own, distinct military presence in the world. At the same time, it now finds itself facing a massive challenge posed by a potential new immigration crisis along its borders.
Whichever EU portfolio is assumed by Greece, Schinas will be forced to deal with one of the EU’s most crucial agendas during the Presidency of von der Leyen.
Stella Kyriakides, the Commissioner from Cyprus, is expected to be named the next European Commissioner for Consumer Protection and Health.
Von der Leyen is expected to officially announce the next EU Commission on Tuesday, September 10.