US Secretary of Commerce Meets Greek PM to Discuss Investment 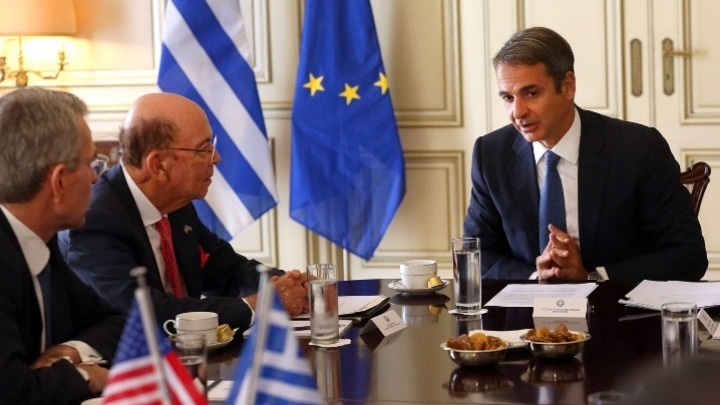 The many investment opportunities offered by Greece and efforts to achieve closer cooperation between Greece and the US in the trade sector dominated a meeting between Prime Minister Kyriakos Mitsotakis and US Secretary of Commerce Wilbur Ross at Maximos Mansion on Thursday
Mitsotakis presented his economic reform program to the American official, a plan which places emphasis on issues linked to Greece regaining its credibility in the economic sector and the simplification of procedures for making investments in the country.
Among the matters discussed were the landmark investments  promoted by the current Greek government, while Mitsotakis also raised the issue of excluding Greek olive oil exports from US trade tariffs against the European Union.
Other issues regarding relations between the EU and the US and matters referring to international trade were also discussed at today’s meeting.
The two officials will speak together again on September 25, during Mitsotakis’ visit to New York City.
The Greek Pri has been invited by Secretary Ross to a working dinner there with American entrepreneurs who  are interested in investing in Greece.
Source: AMNA

A new earthquake measuring 5.9 on the Richter scale shook central Greece at 20:38 on Thursday. The epicenter was near the town of Elassona.
Greek News

The world after the coronavirus pandemic will look very different, according to a new book from Yale professor Nicholas Christakis.