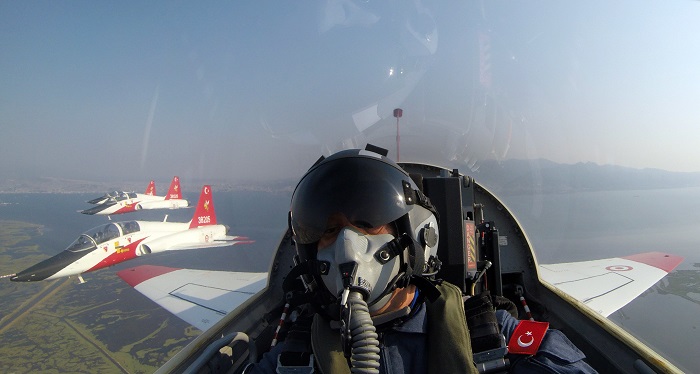 The Greek Defense Ministry refuted a Turkish report and video showing the neighboring country’s Defense Minister Hulusi Akar allegedly flying over the Aegean Sea in a training jet.
On Tuesday, the Turkish newspaper Hurriyet reported that Akar had flown over the Aegean in a T-38 jet to commemorate the opening of the 2019-20 flight training year at Izmir Air Force Base.
However, there was no official statement by the Turkish Defense Ministry that Akar did indeed fly over Greek airspace.
The 4-minute long video shows Akar getting ready for the flight, then, getting on the plane and taking off. Some of the shots show his aircraft flying over the sea, but nowhere is it clear that this is the Aegean Sea – and the Athens FIR in particular.

At the same time, the Greek Defense Ministry and the Hellenic Air Force did not report the particular aircraft violating Athens’ FIR.
Such a flight inside the Athens FIR did not take place in recent days, a source from the Hellenic National Defense General Staff told the website Hellas Journal.
Greek officers who watched the video of the Turkish defense minister inside the training aircraft said that the flight probably took place near the Gulf of Izmir and Cigli airbase, from which young Turkish pilots take off for training.
The report by the Turkish newspaper is most likely a piece of propaganda, analysts said.
The report follows statements made on Monday by the Turkish defense minister, who  allegedly said: “We are in favor of resolving problems under international law, bilateral agreements and amicable relations. But this should not be regarded as weakness or compromise on our part. We will not allow any fait accompli (in the Eastern Mediterranean).”
Meanwhile, Turkish fighter jets continue to violate Greek airspace on almost a daily basis. On Tuesday, a formation of six Turkish aircraft committed 25 violations of Greek airspace in the northeastern and central Aegean. There was also one mock dogfight, which was meant to represent a battle between Greek and Turkish jets.