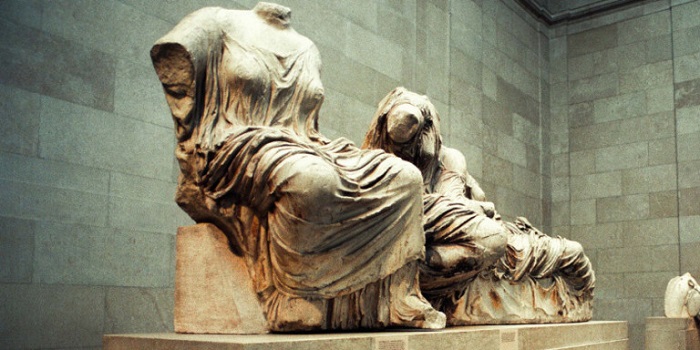 The British Museum rejected on Monday the Greek PM’s proposal to loan the Parthenon Sculptures for the 2021 bicentennial celebrations, saying that Athens must first acknowledge that they are owned by the Museum.
“A precondition for any loan would be an acceptance of ownership of those objects by the Trustees/the Museum”, a British Museum spokesperson told the Greek daily newspaper Ta Nea.
Such a response has killed the Greek premier’s initiative in its tracks as Athens has reiterated that it would not cede rightful ownership of the priceless sculptures to the British institution.
“As this is a matter of theft, it automatically excludes ownership rights,” Greek Culture Minister Leda Mendoni told Skai TV on Tuesday.
It also appears to have put an end to the speculation that the British Museum would follow in the steps of the iconic French museum the Louvre, which is looking favorably upon the Greek request to loan its Parthenon sculptures.
The “Ergastines” relief sculpture, part of the Parthenon frieze, has been displayed in Paris for many decades.
New Greek Prime Minister Kyriakos Mitsotakis told Great Britain’s Observer newspaper on Sunday that he would ask the new British prime minister to lend the marbles to Greece as part of its bicentennial celebrations.
“Given the significance of 2021, I will propose to Boris [Johnson]: ‘As a first move, loan me the sculptures for a certain period of time and I will send you very important artifacts that have never left Greece, to be exhibited in the British Museum’,” said the Greek premier.
In a separate statement on Monday, the British Museum said that a possible loan of artifacts is not a matter between heads of government.
“As a body run by commissioners, any collection loan would be a matter for the British Museum Commissioners, not the UK Government,” the Museum statement read.