By Tasos Kokkinidis
September 2, 2019
Facebook
Twitter
WhatsApp
Linkedin
Email
Reigning champions PAOK and Champions League challenger Olympiacos made it two out of two in the Greek Super League with narrow wins over Panionios and Larissa on Sunday.
Xanthi and Volos continued their impressive start of the season gaining maximum points from their first two games.
PAOK won 2-1 against Panionios in Thessaloniki through a late Karol Swiderski goal. Former Arsenal striker Chuba Akpom had given PAOK the lead before Sotiris Tsiloulis equalized for the visitors.

Olympiacos also had a hard time beating Larissa 1-0 away, having Mathieu Valbuena to thank for his early penalty kick.

AEK chalked up their first win and points of the season thanks to a late goal deep into added time from Andre Simoes which earned the Athens club a 3-2 win over Asteras Tripolis. 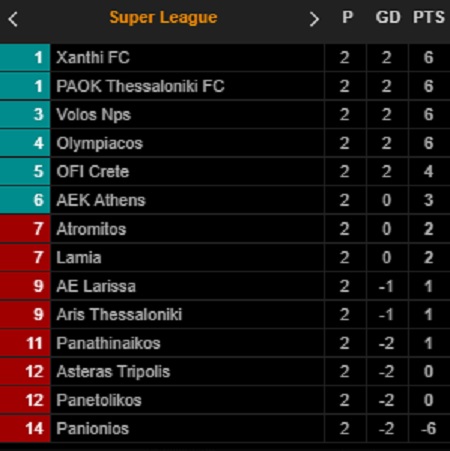