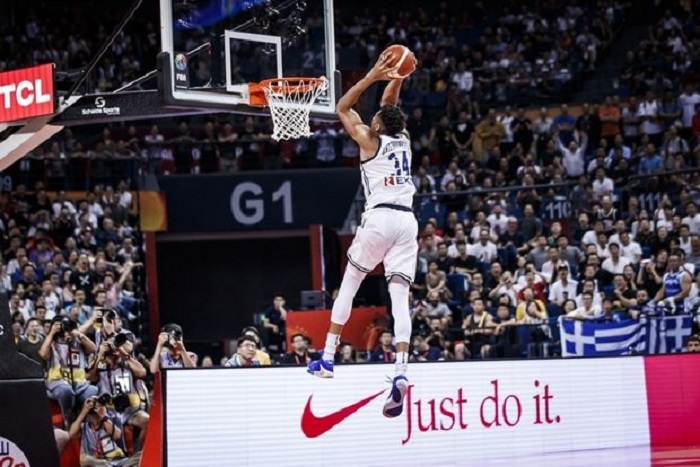 Greece led by Giannis Antetokounmpo opened it’s FIBA World Cup Campaign on Sunday with a comfortable 85-60 win over Montenegro.
The NBA MVP had 10 points and 7 rebounds in just 16 minutes of action avoiding all the drama in Nanjing.
Georgios Printezis scored 16 points in 19 minutes, Georgios Papagiannis went up for 15 points and 9 rebounds in 18 minutes, and Ioannis Bourousis had 12 points of his own while playing less than 21 minutes.
Nick Calathes played for just 22 minutes and scored 5 points with a team-high of 7 assists. Coach Thanasis Skourtopoulos managed to rest his starters and gave Kostas Sloukas 14 minutes to feel the rhythm – the point guard responded with 4 points and 2 assists.
Greece will play against Brazil in the second game of Group F, which also includes New Zealand.
“We started the tournament with a great win and I think that this score is too much, Montenegro is a really good team”, said Greece’s coach Thanasis Skourtopoulos. “After the first minutes, we relaxed and we started playing our game. We are already thinking about the next game against Brazil”.

The San Francisco City Hall will be illuminated with the colors of the Greek flag on March 25, on the 200th Anniversary of the 1821 Greek War of Independence.
Greece

PM Mitsotakis decided that the Committee of Experts will be convened tomorrow morning to evaluate the Covid-19 epidemiological data throughout the country.