By Helen Skopis
August 30, 2019
Facebook
Twitter
WhatsApp
Linkedin
Email
She doesn’t only believe that “Age is just a number” — this Greek grandmother has become living proof of that adage.
At 81 years of age, Greek windsurfer Anastasia Gerolymatou will now have her name in the Guinness Book of Records after sailing from Skala, Kefalonia to Kyllini, located on the Pelopponesian Peninsula, on Saturday, August 24th.
She crossed the eighteen nautical miles of the Ionian Sea on her windsurfer in a nonstop trip of just six hours, after dreaming of this moment for forty years.
Gerolymatou related to the Greek Reporter that “I started windsurfing when I was 41 years old. I was on a three-week vacation with my second husband and my two children so we could get to know each other better.
“On the day before we were scheduled to leave, I saw a young man windsurfing and I was fascinated by it. I walked down the beach to the man who was renting windsurfers and persuaded him to rent me one. That was my first experience,” she recalls.
Gerolymatou added that “Naturally, it was very difficult, as it was on the Atlantic Ocean. The wind was strong and I didn’t know how to get back, but I managed. We were in Las Palmas, one of Spain’s Canary Islands. I managed to buy my own windsurfer five or six years later. I am self-taught.” 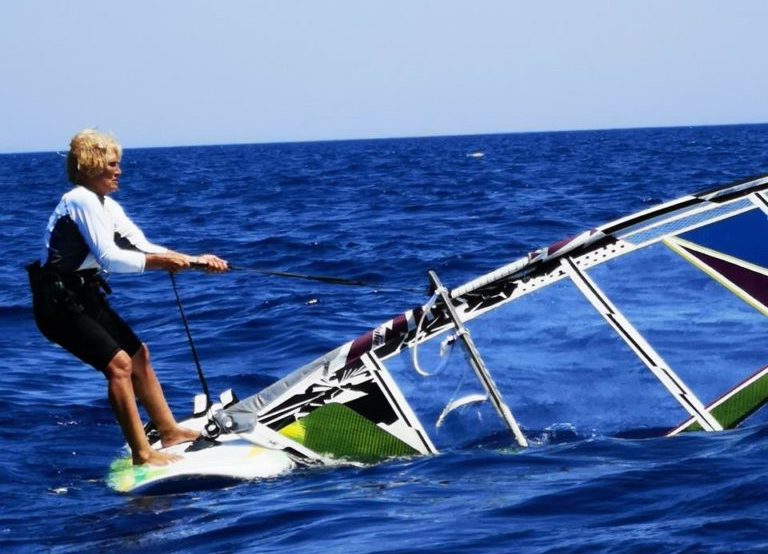 Gerolymatou left the Ionian island of Kefalonia where she was born in 1954 and didn’t come back for 22 years.  She went to Athens, living there for four years and then left Greece in 1958 to live in Switzerland.
It hurts her to be far away from Kefalonia, so she returns whenever she can, sporadically throughout the year, especially in the summer, since she and her family have a home there.
The lean, beautifully-toned octogenarian insists that “I need to tend to the garden and I can also surf. It’s fantastic riding the waves with the wind.”
She also points out that windsurfing is a sport which doesn’t pollute the sea in any way, as opposed to almost all other boating activities. She is against oil exploration in the Ionian Sea and points out to the Greek Reporter that “There are various other energy sources; we can use solar energy, wind energy. If we use these alternatives, everything will be much better.”
The Greek windsurfer explains that “I am afraid that all the rocks and the beaches will become black from the tar. And the wings of the birds will be covered with oil which cannot be cleaned. That would be devastating.
“And what about the fish, the seals and all the other animals that live in the sea? What will happen to them? I find this very frightening,” she adds. 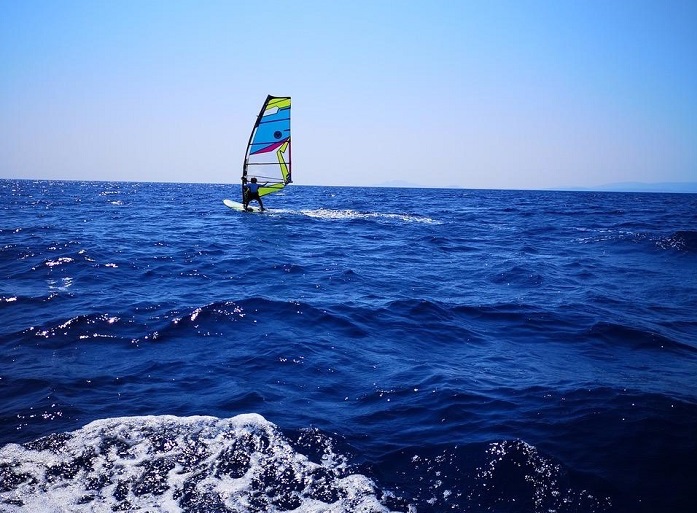 The 81-year-old is also concerned about Greece’s younger generation. “We had problems when we were young too, but the way things are now is very bad. Most young people are uninsured and work for a very small amount of money. How can they live, let alone pick up a sport? Most are in despair.”
However, she advises them to “Never give up, and always look forward. There is always a path that one can follow. I also went through tough times when I was young. My first marriage fell apart, but I made it through. I would look to see what other people were doing so I can learn,” she adds.
The world record-holding athlete from Kefalonia also has three grandchildren, who she says were her main incentive to do what she has done in the world of windsurfing. “I did it so my grandchildren can remember me for what I accomplished,” she says with pride.
Gerolymatou plans to keep windsurfing for as long as she is strong enough to do so. She watches what she eats and she keeps herself busy by doing the things she loves and for which she has a passion.
Despite that, as she told the Greek Reporter, “I am not interested in breaking any other world records.”