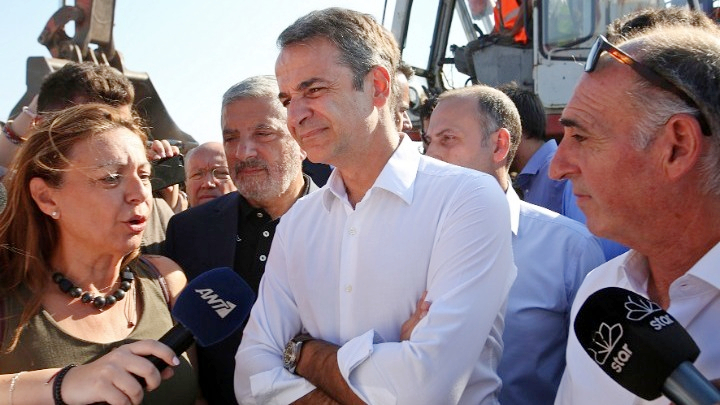 Prime Minister Kyriakos Mitsotakis paid a visit on Friday morning to the site on Marathonos Avenue used to store the burned tree trunks cleared from the charred landscape after last year’s destructive fire in the seaside town of Mati, Attica.
The foreman of the crew handling the ongoing cleanup to clear the site of the flammable timber, briefed the premier about the work and the PM thanked him and congratulated him for his efforts.
“It was finally much simpler and easier to clean up the ‘time bomb’ lot but someone had to get down to it,” Mitsotakis said, adding that he was personally committed to a goal of improving life in Mati in order to heal the town’s wounds.
Mitsotakis also stated that a number of foreign universities are interested in creating a plan for Mati’s revival and that a plan for its reconstruction and organization will be completed in one year from now.
The region’s ordinary citizens will also have a role in helping reshape the area’s future.
The prime minister highlighted that the clean up was taking place without any cost to the state, and even within the given time frame.
Seizing the opportunity of his visit, Mitsotakis announced a complete overhaul of the civil protection and forestry policy of the country, with a focus on prevention once this year’s fire season is over.
”Protection of human life and property are paramount,” the prime minister declared.
Mitsotakis also spoke with local residents and government officials and agreed to meet with them again soon — but privately, without the presence of cameras and reporters.
Roughly 20,000 tons of flammable material cleared from the scorched areas had been left at the cleanup site near Mati, posing another potential fire hazard for the town if it had been allowed to remain there any longer.
With information from AMNA