GRNews
GreekReporter.comGreek NewsDiplomacyGreece Decides it Will Not Assist Iranian Oil Tanker After US Warning 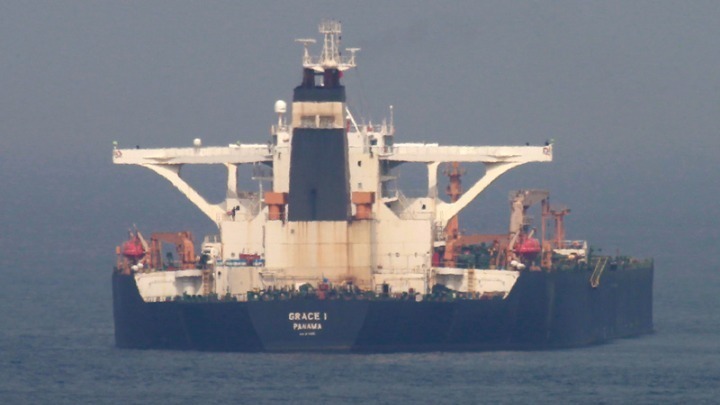 The re-named Iranian oil tanker “Adrian Darya 1,” originally the “Grace 1”
Greece will not help the Iranian tanker suspected of carrying oil to Syria, which is now headed for the port of Kalamata, Deputy Foreign Minister Miltiadis Varvitsiotis stated on Wednesday.
The Greek official spoke in an interview on ANT1 television after the United States issued a warning saying that whoever aids the Iranian ship will be effectively supporting terrorists and may face sanctions.
Varvitsiotis said that his country will not facilitate the course of the ship to Syria in any way whatsoever. He also confirmed that Greece had received pressure from the US to not assist the Iranian tanker in any way.
Furthermore, Varvitsiotis said, the enormous “Adrian Darya 1” oil tanker is too large for any Greek port to accommodate in any event.
The Adrian Darya 1 started its journey as the “Grace 1” under a Panamanian flag, carrying 2.1 million barrels of oil, with an estimated value of $150 million. The ship had been detained in Gibraltar since July 4 because of the existing EU sanctions against Syria.
During its detention in Gibraltar, the ship was renamed the Adrian Darya 1, and it exchanged its Panamanian flag for one from Iran.
Washington had asked for an extended detention of the ship, but authorities on Gibraltar could not comply, following the strictures dictated by maritime law.
After the ship sailed from Gibraltar on Sunday with a reported destination of Greece, US Secretary of State Mike Pompeo threatened that sanctions would be levied on any country that helped the tanker in any way.
The Adrian Darya 1 left Gibraltar last Sunday and listed the Greek port of Kalamata as its destination. It is currently in the sea just north of the Algerian port of Oran.