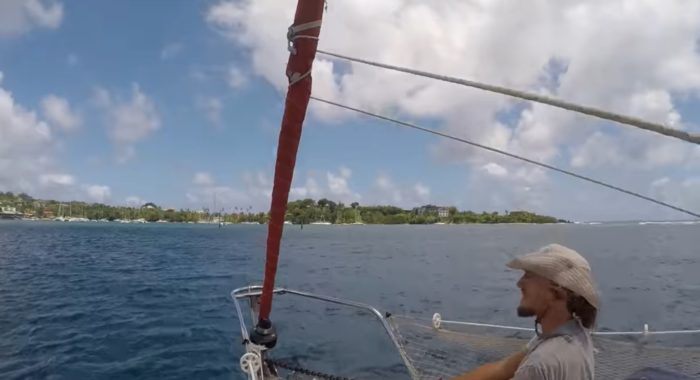 Cleanthes Anastasakis is a 27-year old Greek man from Crete who has been cruising around the world for the last two years in a courageous attempt achieve his goal of circling the entire globe on his sailboat.
Anastasakis began his adventure in August of 2017, and he has spent most of his life on board his beloved sailboat “Nala” ever since that day.
The 27-year old explorer has managed thus far to cruise across the entire Mediterranean, the Eastern Caribbean and along the west coast of Africa, albeit with many intermediate stops along the way.
However, the brave young mariner is no longer alone on his global quest because he now sails together with his girlfriend and their beloved cat. Anastasakis admits that he has to work sometimes before the next leg of his voyage in order to earn money to cope with the expenses of his quest.
The young man says that his expenses so far for their food and water, as well as for the necessary maintenance that must be performed on the boat, have amounted to approximately €19,000.
His next ambitious destination will be Patagonia in the southernmost reaches of the continent of South America, but he must first determine what the absolute best time of year would be to sail there, since the seasons are reversed in the southern hemisphere.
Living on a sailboat can be extremely challenging in any climate, especially when it comes to essentials such as food and water.
Anastasakis told reporters recently that his relatively small vessel can take on only 250 liters (66 gallons) of water at a time, so they must always be extraordinarily careful with how they use the precious resource. Some legs of their journey from one port to another can last up to a grueling forty days.