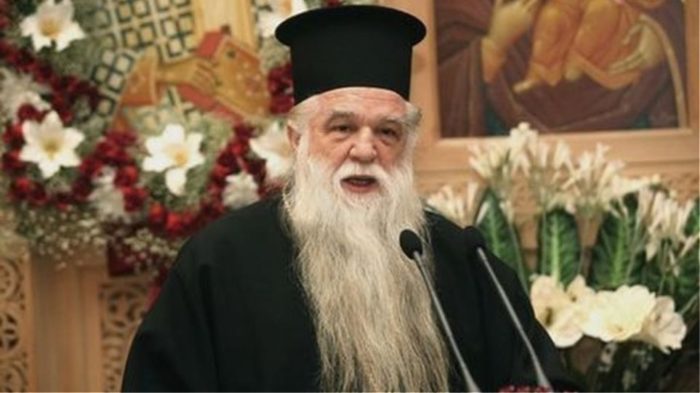 The bishop of Kalavryta and Aegialeia Ambrosios announced on Sunday morning that he is resigning from his post.
Speaking during Sunday’s service in the church of the Dormition of Virgin Mary in Greece’s town of Kalavryta, the bishop announced that this would be his last service as a bishop, since he signed the letter of his resignation, on Saturday.
Ambrosios has been one of Greece’s longest-serving bishops as he has been the bishop of Western Greece’s ecclesiastical region of Kalavryta and Aegialeia for 41 years now.
Ambrosios has been a controversial figure among the country’s Orthodox Church, as he has been repetitively provoking the public with his extreme, right-wing, ultra-conservative and homophobic views.
In 2015, Ambrosios sparked wide negative reactions for a homophobic rant.
The northern Peloponnese bishop had advised people to spit on gays in 2015, saying ”do not go near them! Do not listen to them! Do not trust them! They are the damned members of our society!”.
Earlier this year, Ambrosios was found guilty of abuse of ecclesiastical office and incitement to hatred by a court in Aigio for these remarks.