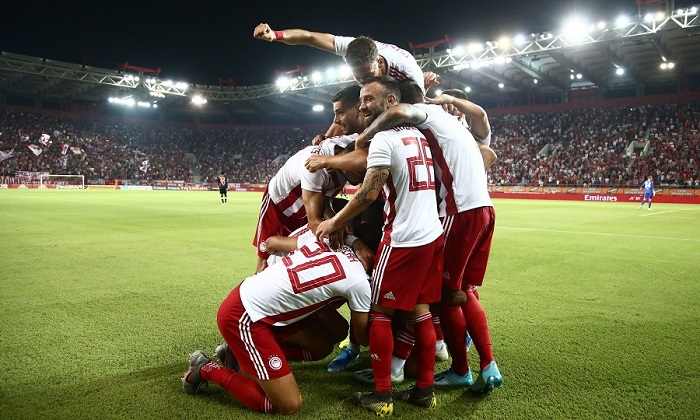 Olympiacos booked their place in the UEFA Champions League playoffs on Tuesday after a 2-0 win over Istanbul Basaksehir, while PAOK fell heroically to Ajax, last year’s semi-finalist, losing 3-2 at Amsterdam.
Olympiacos, who won 1-0 in the first leg in Turkey last week, finished the job with the minimum of fuss at the Georgios Karaiskakis stadium.
After a goalless first half, Ruben Semedo opened the score on the 55th-minute. Olympiacos doubled their advantage after 77 minutes with Mathieu Valbuena converting a penalty.
https://www.youtube.com/watch?v=cB7mhBurwF8
Last season’s Champions League semifinalist Ajax came close to crashing out in qualifying Tuesday, coming from behind to beat PAOK 5-4 on aggregate.
Ajax faced elimination when its former youth player Diego Biseswar scored for PAOK in the 23rd minute to put the Greek team 3-2 ahead on aggregate.
Ajax captain Dusan Tadic saw one penalty saved, but scored a second to draw level. A Nicolas Tagliafico header finally put the Dutch team ahead in the 79th, before PAOK’s rough, physical style handed Ajax a third penalty converted by Tadic.
Biseswar scored again in stoppage time for PAOK to again put Ajax in danger, but the Dutch champion held on to win. PAOK’s players and staff surrounded the referee to protest after the final whistle.
Ajax now face a playoff tie with APOEL, while PAOK will drop down to the Europa League playoffs.