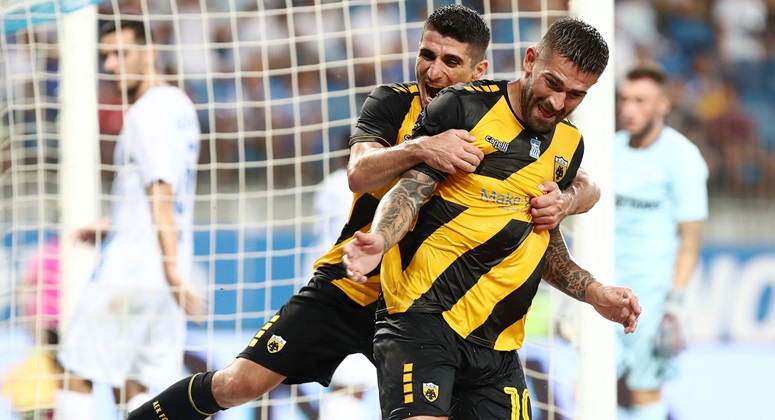 The AEK football club beat CS Universitatea Craiova by 2-0 in Romania on Thursday in the first leg of the third qualifying round of the UEFA Europa League 2019-20, which practically secured them a spot in the playoffs for the group stage.
Atromitos claimed a thin advantage over Legia Warszawa in their Europa League 0-0 tie in Poland, as the Greek club presented a great defensive display.
At the same time, in Norway, Molde thrashed Aris 3-0, eliminating any hopes for the Thessaloniki team to advance in the playoffs.
AEK had an easy match in Romania, with Marko Livaja named as the game MVP. The Croatian player sent an excellent cross to captain Petros Mantalos, who managed a masterful header to send the ball into the net in the 60th minute. Then it was Livaja’s turn to seal the victory in the 86th minute.
Atromitos had goalkeeper Balazs Megyeri in rare form and two Legia efforts ended against the post. Nevertheless, with solid defensive tactics, the Greek team left Poland hoping for a win in Athens.
Aris, who had center back Fran Velez sent off in the second half, had a disastrous five-minute period (27′-32′) when Magnus Eikrem and Eirik Hestad scored two goals for the Norwegian team. After that, the Thessaloniki club could not do much to come back into the game, with Martin Ellingsen scoring a third goal for Molde with only three minutes remaining.