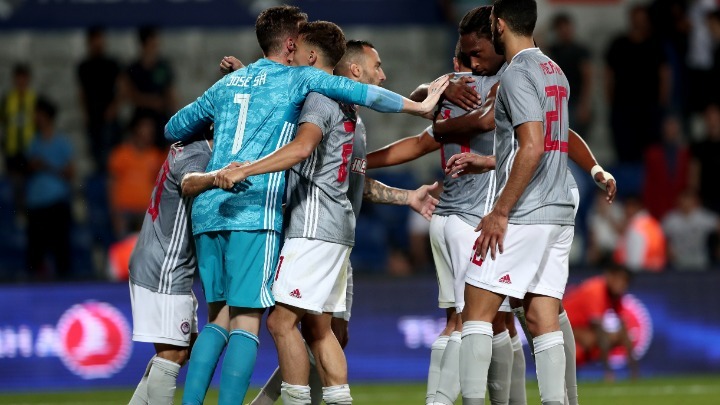 Olympiacos made a crucial step toward advancing to the playoff round of the UEFA Champions League, after beating Istanbul Basaksehir 0-1 on their home turf on Wednesday.
Although the Reds were admittedly not at their best in offense in the first half, they were always in control of the game, and didn’t allow their goal to come under threat many times. And when it did, goalkeeper Jose Sa was there to protect it.
The Turks had a hard time approaching the Greeks’ box, as stoppers Ruben Semedo and Yassine Meriah had put up a wall against the home team’s offense.
Not much of note happened in the first half, but in the second, Basaksehir returned to the game stronger and more determined to win. Yet the Olympiacos defense, especially goal minder Sa, didn’t give them much room to make serious threats.
Mathieu Valbuena showed his great skills in the 53rd minute of the game by dribbling past his personal defender and lifting the ball into the box, where Giorgos Masouras was waiting to send it into the net with a crafty header.
The Turkish team started going forward to equalize, but still were unable to threaten Olympiacos’ masterful defense. And when Mady Kamara replaced the exhausted Valbuena, the Greek team began to completely dominate the midfield, keeping the ball away from their box.
When Brazilian midfielder Bruno entered the game in the last five minutes of regular time, replacing Masouras, it seemed that Olympiacoa had clinched the three points. Yet Bruno committed the gravest error in football in the second minute of injury time by using his hand to block a cross by Bosnian midfielder Edin Visca
This unfortunate move forced the referee to point at the penalty mark.
It all seemed lost when Visca set the ball in place and took a few steps back for the penalty kick. But Sa said a clear “no” to that idea, saving the kick by Visca and securing the much-needed victory.
Now the Reds are eagerly waiting to finish the job at Georgios Karaiskakis stadium in Piraeus on Tuesday, and advance to the Champions League play-offs.