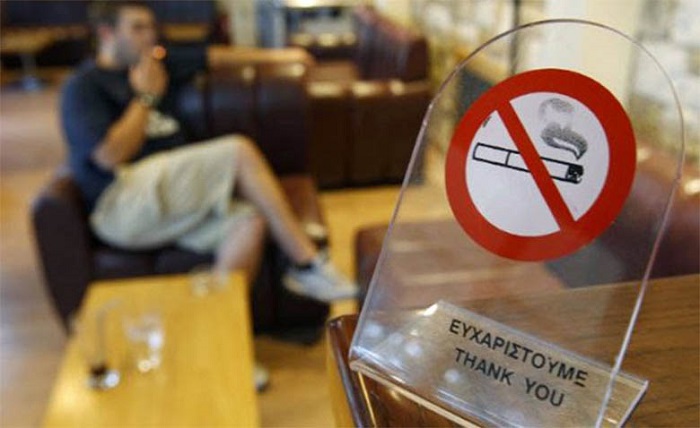 Greece’s Health Ministry sent detailed instructions to local authorities throughout the country on Monday regarding the strict implementation of a smoking ban in public places.
The ban has been largely flouted ever since its passage by Parliament in 2008, but the new Greek government says it is determined to enforce the unpopular law.
Signed by Health Minister Vassilis Kikilias, the new memo reminds local authorities that they must enforce the ban in all public spaces, including all local and national government offices, as well as medical, educational and childcare service locations.
In addition, the ban includes sports arenas, and all indoor bars, restaurants and cafes – where the law tends to be flouted blatantly – as well as work areas and airports (with the exception of specially-designated smoking rooms).
The law applies to all passenger waiting areas, including those for public transportation and taxis. It also bans smoking in vehicles, whether public or private, which are carrying children under the age of 12.
Various Greek government administrations over the years since the anti-smoking law’s passage have promised to implement the ban in the past decade, but have made minimal to no progress.
According to the EU statistical service Eurostat, Greece — along with Bulgaria — has the highest smoking rate of any nation in the EU.
European Commission officials have in the past condemned Greek officials’ failure to follow through on their promises to reduce smoking nationwide and their scant progress made in enforcing the smoking ban.