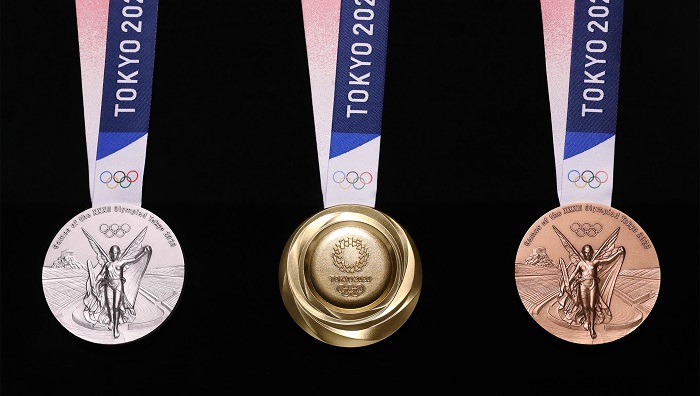 With exactly one year to go until next year’s Olympic Games in Tokyo, the medals for the 2020 games were unveiled on Thursday in a gala ceremony in the Japanese capital.

The medals, which are 85 millimeters (3.3 inches) in diameter, feature a design of Nike, the Greek goddess of victory, along with the Olympic symbol, and are made from recycled metals collected from 6.21 million electronic devices which were donated across Japan.

The unveiling of the medals, designed by Junichi Kawanishi, was the main attraction of an extravagant ceremony attended by International Olympic Committee president Thomas Bach and Japanese Prime Minister Shinzo Abe.

The intricate designs, which will adorn all 5,000 medals awarded at the Games, reflect patterns of light in order to symbolize the energy of the athletes and those who support them.

The designs also represent how athletes strive for victory on a daily basis, as well as the Olympic themes of diversity and friendship.

“It is a great honor that my design was selected for the Tokyo 2020 Olympic medal,” designer Kawanishi stated during the ceremony.

“I never dreamed that the design I submitted only as a memorial to this lifetime event would actually be selected. With their shining rings, I hope the medals will be seen as paying tribute to the athletes’ efforts, reflecting their glory, and symbolizing friendship,” he added.