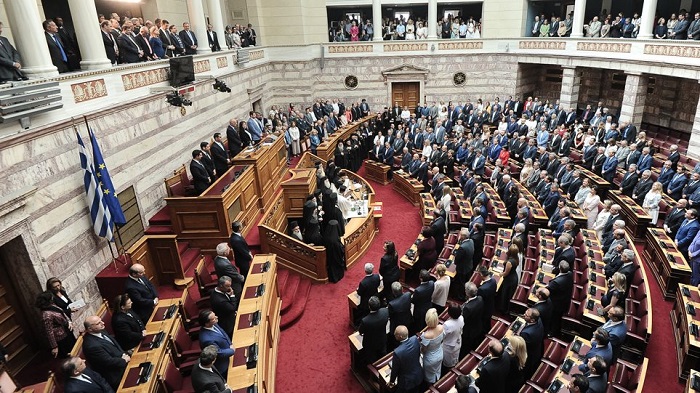 Greece’s parliament was sworn in Wednesday after the July 7 elections that saw a broad conservative victory end over four years of leftist rule.
Six parties are represented in the new 300-seat chamber: New Democracy with 158 seats, SYRIZA – Progressive Alliance with 86, Movement of Change with 22, Communist Party of Greece (KKE) with 15, “Greek Solution” with 10 seats, “MeRA25 (DiEM25) with 9 seats.


There are two fewer parties than the previous parliament, but two of them are new — Greek Solution, a nationalist party formed by TV salesman Kyriakos Velopoulos, and MeRA25, an anti-austerity party founded by maverick economist and Tsipras’s former finance minister Yanis Varoufakis.
In contrast, Neo-Nazi party Golden Dawn was shut out of parliament for the first time since 2012.
The chamber’s first task is to elect on Thursday a new President of Parliament. Ruling New Democracy has proposed Kostas Tasoulas.
New Prime Minister Kyriakos Mitsotakis will outline his government’s policies at the weekend before a vote of confidence is held late on Sunday.