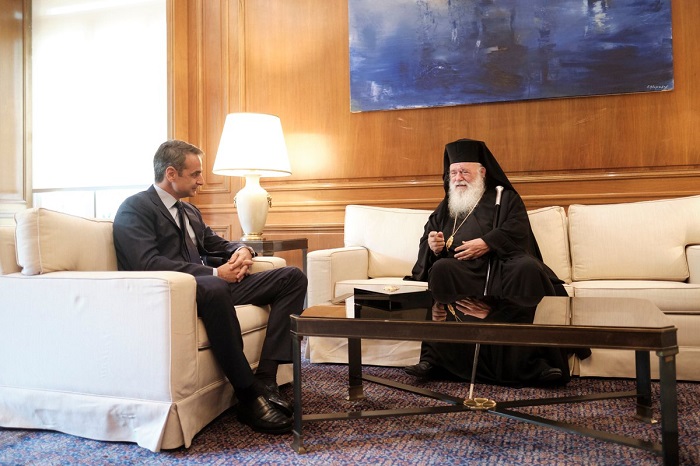 Greek Prime Minister Kyriakos Mitsotakis assured Archbishop Ieronymos on Tuesday that his government will not implement the agreement forced through by the previous leftist administration which sought to loosen relations between the state and the Orthodox Church.
Mitsotakis said that his government will not follow through with changes to Articles 3 and 13 of the Constitution, which determine relations between the the two institutions.
“I look forward to a very substantial cooperation with you. There are many issues that we need to address, but always in good faith and by respecting the constitutional requirements of Articles 3 and 13 of the Constitution, for which, as I have already informed you, there will be no changes in the constitutional revision,” the PM told the Archbishop in brief comments in front of cameras at Maximos Mansion.
Furthermore, plans already made concerning religious education classes and contested assets will go back to the drawing board.
Greece’s former PM Alexis Tsipras reached a tentative agreement with Ieronymos in November of 2018 to move some 10,000 clerics off state payrolls, although their wages would still have been paid in the form of a state subsidy.
The plan also foresaw the joint development of disputed real estate assets and the establishment of a so-called “religion neutral” state.
The move was rejected by the Holy Synod, which insisted that priests in Greece retain their status as civil servants.
The previous Parliament also approved in late February the revision of Article 3 – which would have abolished the references to the Holy Trinity and a “prevalent religion” in the constitution’s preamble – by the slimmest possible margin of 151 votes in the 300-seat House.
Article 13 refers to the safeguarding of the political oath taken by politicians in Greece.
However, the actual revisions will need to be approved by the current Parliament in order for them to be applicable.