By Philip Chrysopoulos
July 9, 2019
Facebook
Twitter
WhatsApp
Linkedin
Email
A body of a woman that has been found in a cave in Chania, Crete on Tuesday morning is likely to belong to American biologist Dr. Suzanne Eaton, who has been missing since July 2nd, according to local media reports.
According to NeaKriti.gr news website, a man found the body in the Maleme area, which is about 10 kilometers from Kolymvari. The body has not been identified yet, but police have notified Eaton’s relatives.
The area where the body was found has been cordoned off but police have not yet officially confirmed that the body belongs to the missing biologist nor have they revealed the cause of death. An emergency rescue team has been called in to retrieve the body.
According to the Max Planck Institute of Molecular Cell Biology and Genetics in Dresden, Germany, where Eaton was a research group leader, Greek police recovered the body on Monday night.
“It is with enormous sadness and regret that we announce the tragic demise of our dearest friend and colleague, Suzanne Eaton,” the institute said in a statement Tuesday. “We are deeply shocked and disturbed by this tragic event. Suzanne was an outstanding and inspiring scientist, a loving spouse and mother, an athlete as well as a truly wonderful person beloved to us all. Her loss is unbearable.”
In a message on Facebook on Tuesday midday, Eaton’s family call on all concerned to avoid speculation. “We cannot comment on anything at this time, but we will post a message when the time is appropriate.” 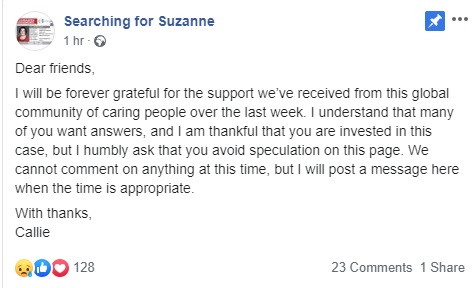 Dr. Eaton, a scientist at Max Planck Institute of Molecular Cell Biology and Genetics in Dresden, Germany who was in Crete for a science conference, has not been heard from or seen since her disappearance.
She was staying at the Orthodox Academy of Crete near the town of Kolymvari, west of Chania.
Her friends and family announced on Saturday that they are offering a cash reward of 50,000 euros for information that will lead to Dr. Eaton being found.
The missing scientist’s family, Red Cross officials and local volunteers had joined the police and fire service search operation. A police helicopter, a drone and trained dogs were deployed in the effort to find the whereabouts of the American scientist.
The scene at the place where the body was found: