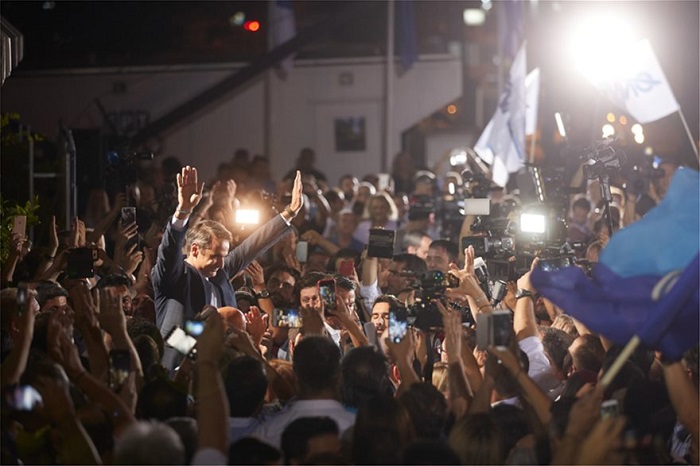 The international press hailed the victory of New Democracy and Kyriakos Mitsotakis on Sunday’s national election in Greece.
CNN says that the outcome signals a clean break with years of firebrand populism and a return to mainstream politics. The vote for Mitsotakis is “a protest vote against a government that over-promised and failed to deliver; a message to populists worldwide that things can change and then change back.”
The BBC quotes Mitsotakis: “The country proudly raises its head again.” It reports that the PM-elect told the crowd in Athens that he would be a prime minister for all because Greeks are “too few to stay divided”.
In another report, BBC says the legacy of Alexis Tsipras is to have shed the populist demagoguery that first swept him to power. It quotes Greek professor George Pagoulatos saying: “When populists are tried in power, they face the same constraints of mainstream governments – and don’t necessarily respond more successfully. In Greece’s case, they were inept and brought the country to the brink of economic collapse.”
“Mitsotakis leads revival of New Democracy as Tsipras gambit backfires”, wrote The Financial Times. In another report, it says that, “Mitsotakis faces long road to complete Greek revival.”
“With an absolute majority in parliament for his New Democracy party, Mitsotakis will be able to cut taxes, sell off state assets and scale back bureaucracy, all with the aim of boosting investment and unleashing animal spirits in the economy,” the FT claims.
“Is it the end of populism in Greece?” Aljazeera wrote. “Rather than end the austerity measures that he had campaigned against, Tsipras imposed more taxes,” the news website wrote, adding that Greek voters turned to New Democracy to improve the economy.
“Greek election: Conservative party regains control, ousts left-wing PM”, was the title of the report on Fox News. The story speaks about Mitsotakis, “delivering a stinging blow to leftist Prime Minister Alexis Tsipras after a tumultuous four years in office as the country struggled through a crippling financial crisis.”
The results indicated Greek voters bucked a recent trend in Europe of citizens rejecting the political mainstream and turning to populist and euroskeptic parties, the Associated Press says.
“PM-elect Mitsotakis vows to make Greece ‘proud’ after vote triumph”, AFP wrote, quoting Mitsotakis promising, “jobs, security and growth”.
“Long economic crisis ushers in new leadership  in Greece”, wrote the New York Times. “Greeks are hurting and angry after a decade of brutal austerity, and Prime Minister Alexis Tsipras paid the price by losing control over the government.”
The paper says: “Tsipras’s supporters had argued that after years of austerity, he has lifted the country out of the depths of the financial crisis and the economic picture has improved. But critics said his tenure as prime minister had been disastrous for entrepreneurship, crushing the middle class and eroding the rule of law.”
In reporting the election results, The Guardian used as its title a quote Kyriakos Mitsotakis used in his history speech: “Greece is not Europe’s ‘poor relative’, says Greek PM-elect after landslide victory”. “I want a strong Greece, with self confidence, that will claim in Europe what it deserves and not be a beggar or a poor relative.”