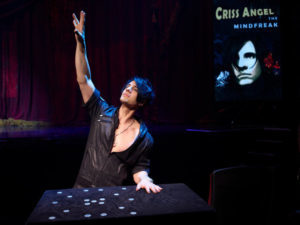 On July 3, I was afforded the privilege to review world-renowned Greek-American magician Criss Angel’s “Raw — The Mindfreak Unplugged” show at the Lunt-Fontanne Theatre on Broadway in New York City.

Angel shared inspirational stories growing up on Long Island, New York, honing and perfecting his craft, and how it took him 18 years to become an overnight success.

Some of his most memorable demonstrations included the razor blade swallowing, the metamorphosis, which he performed in a straightjacket in a lightning-fast rate, his close-up coin routine entitled “Black Star,” his teleportation and crossbow act featuring a deck of cards. It is always thrilling to see Angel do mentalism and interacting mind-reading with the audience (where he predicts in advance the answers that they are going to tell him).

The inclusion of French master manipulator Stefan Vanel in his act was an added treat since he is an amazing card manipulator, if not the greatest in the world. Las Vegas’ Mike Hammer brought his comedy magic on stage for a brief segment, which was well-received by all.

Most impressive about this theater is that one of his greatest heroes in magic, Doug Henning, performed at the same time nearly 35 years ago, back in December of 1984. “It is so incredibly sweet to pick a theater that my childhood hero, Doug Henning, once performed in 1984. This is truly a historic experience and a magical experience for me,” Angel said.

Angel closed his set with a spell-binding levitation that left everybody in total awe. Seeing him walk down a still ladder and floating in the air was quite the spectacle.

Despite all of his career accomplishments, Angel does not rest on his laurels. He always modernizes and revolutionizes every magic production of his, and keeps his material fresh, honest and authentic.

It is safe to say that Angel made his late father, John Sarantakos, proud since although his dad passed away from cancer in 1998, it was his father’s lifelong dream for Angel to perform on Broadway someday, and thanks to his “In Residence on Broadway,” he was able to make that dream a reality.

The youngest and today the only working magician worldwide to be honored the highest and most prestigious award in magic from the International Brotherhood of Magicians, “The Lifetime Achievement Award” (this has only been given six times in nearly the 100-year history of the organization), Criss Angel was also honored this year with “The Greatest Magic show Of All Time (The Goat)” Award from Vanish Magazine, the largest magic publication worldwide and was most recently awarded with “The Best Show In Vegas” by Celebrity Radio, the leading review site for England’s West End and Las Vegas shows.

Overall, Criss Angel was spectacular at the Lunt-Fontanne Theatre in New York as part of his “Raw — The Mindfreak Unplugged” show. There was something in it for the whole family. He was daring, badass, witty, clever and just a phenomenal live performer. He embodied the magic and his presentation skills were top-notch. He is consistently able to move his audience on an emotional level, and he is the epitomize that anything is possible thanks to hard work and dedication to one’s craft. His passion is simply contagious.

Despite performing during a week when all of Broadway struggles to fill seats (July 4th week in New York is as bad as January is for Vegas productions), the theater was full and the audience was reacting like they were at a rock concert, rather than a quiet Broadway Theater. In fact, rumor has it that Criss will be coming back in 2020 during the exciting winter holidays.

With Angel, Broadway has found a new “King of Magic.” Angel was able to fulfill his childhood dream at this iconic venue in his home state of New York, while simultaneously paying tribute to one of his all-time favorite magicians, the late but great Doug Henning. His “Raw — The Mindfreak Unplugged” show on Broadway garnered five out of five stars.

To learn more about world-class magician Criss Angel, check out his official website.