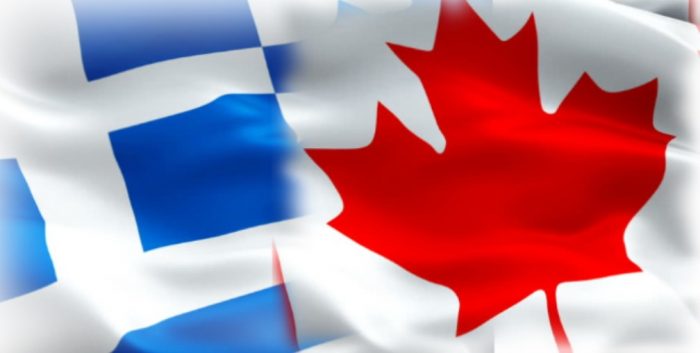 The long-standing friendship between Canada and Greece, within a shared value system, and the prospects of deeper collaboration between the two countries were highlighted at a special event hosted by the Canadian Embassy at the Acropolis Museum on July 1st, on the occasion of Canada Day.
The Ambassador of Canada, Mark Allen, launched his greeting by praising the two countries’ shared objectives of peace, prosperity, international order, sovereignty and territorial integrity.
He also said that the belief in and practice of human rights and gender equality, democracy, the rule of law, and free and fair trade also “unite the two countries.”
Food, agriculture and aviation are also key areas of cooperation between the two countries, Allen noted, saying his government “looked forward to” Greece’s upcoming ratification of the recent Canada-EU Comprehensive Economic and Trade Agreement.
The Canadian ambassador commended the symbolic significance food holds in both Canadian and Greek cultures, and introduced chef Alain Bossé (known as “The Kilted Chef”), who in partnership with the Canadian Department of Agriculture and Agri-Food presented guests with “A Taste of Canada” at the event.

Allen highlighted the long aviation history that bonds the two countries for almost 80 years, in both the civil and military realms, and mentioned the Joint Air Training Scheme, Canada-Greece’s first aeronautic collaboration in 1940, which “brought mutually rewarding security and economic benefits back then, just as our partnerships continue to do today.”
“Without a doubt, our strongest and most valuable bonds are our people-to-people links,” Allen said, referring to the 27,000 Canadians who “are able to claim Hellenic ancestry”.
He also cited Canadian-Greek artist Katerine Duska who represented Greece at the recent Eurovision contest, and who also recited the Canadian and Greek national anthems, among other songs, at Monday’s event.
Greek Deputy Foreign Affairs Minister, Terence Quick, thanked Canadian Prime Minister Justin Trudeau, for “keeping his promise” to accept 40,000 migrants and refugees from Greece. “He did it, and it is something very important for us, and for his keeping his word,” Quick said.
Source: AMNA