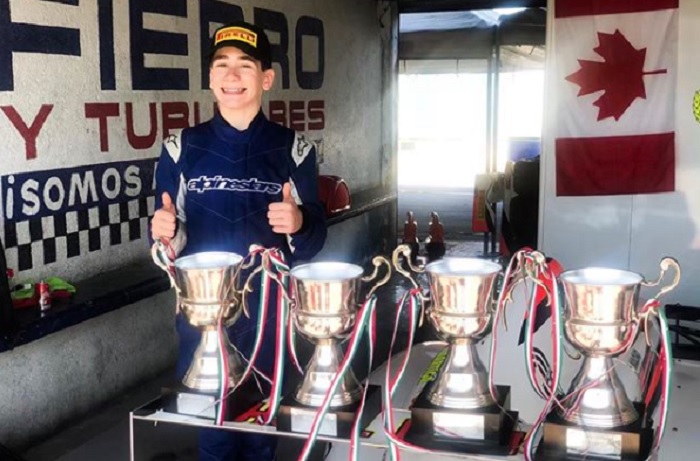 Nico Christodoulou is a fourteen-year old Greek-Canadian Formula 4 driver, whose achievements and driving talent have already made him one of the most promising rising stars in the field of car racing.

Born in Toronto, Canada in 2005, Christodoulou burst onto the very competitive scene of kart racing at a very young age.

He had earlier won the “Intrepid Kart” scholarship from Goodwood Kartways, rewarded for his passion and commitment to the sport.

VOTES NEEDED!! I am happy to have made it to the finals for the Young Driver of the Month. Please vote for me one more time to count for the finals 🙏🏻 Here’s how: – – 1. Go to @f1_youngdriversmonthly 2. Tap their profile picture to go to their story 3. Scroll through their story until you see the page called F4 Young Driver Of The Month Final (5th page of the story) 4. Vote for me ‘NACHO’ – – I appreciate all of your support! 👍🏼🏎😊

A post shared by 🇨🇦 Nico Christodoulou (@nicochristodoulouofficial) on Mar 28, 2019 at 4:17am PDT

As his website notes, by the summer of 2017, Christodoulou was the number one ranked Briggs and Stratton Junior lite driver in North America, taking home two championship titles, more than 12 podium finishes and many prizes.

After that, Christodoulou was scouted by a Ferrari-affiliated development coach who recognized his talent and began to foster his learning in open-wheeled cars, namely the F-1600 and Formula 4.

The young Greek Canadian driver is presently participating in the F2000 Championship Series in the United States, having already racked up two poles and a win at Virginia International Raceway in 2018.

His big dream? To make it to Formula 1, where world-class superstar drivers compete and mesmerize millions of spectators across the globe with their talent.

Teamwork!! Heading out for some practice laps. Thanks to all the crew @martiga_mx for all their hard work to keep my car running well. #HechosParaGanar

A post shared by 🇨🇦 Nico Christodoulou (@nicochristodoulouofficial) on Jun 15, 2019 at 10:18am PDT

Formula 4 is an open-wheel racing car category intended for junior drivers. There is no global-scale championship, but individual nations or regions can host their own competitions.