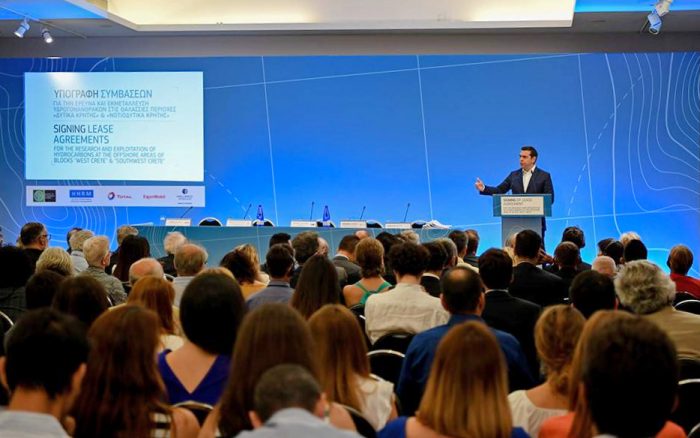 Greece signed a formal agreement on Thursday with the companies ExxonMobil, Total and Hellenic Petroleum (ELPE) to research and exploit the natural resources located south and west of the island of Crete, in the Mediterranean Sea.
Many high-ranking officials, including Greek Prime Minister Alexis Tsipras, attended the Thursday morning ceremony which celebrated the signing of the landmark agreement.
Also in attendance was George Stathakis, Greece’s Environment and Energy Minister, Christophe Chantepy, the French Ambassador to Greece, and Geoffrey Pyatt, the US Ambassador to Greece, as well as representatives from the three companies involved.
The groundbreaking agreement was made between the Greek state and a consortium comprised of the American company ExxonMobil, the French energy company Total and the ELPE energy companies.
”Today is a historic day, because Greece is making a big and decisive step to capitalize on its energy wealth,” Tsipras said in his opening remarks at the signing ceremony.

“This development offers another perspective to Greece’s geopolitical role, but at the same time another development and economic outlook in Greece,” the prime minister underscored.
“Greece, like Cyprus, is proceeding with well-planned and coordinated steps to the utilization of our energy resources,” Tsipras said, noting that these were not actions carried out for ”show purposes,” but were efforts aiming “to create good prospects, economic prosperity and security for our people and future generations.”