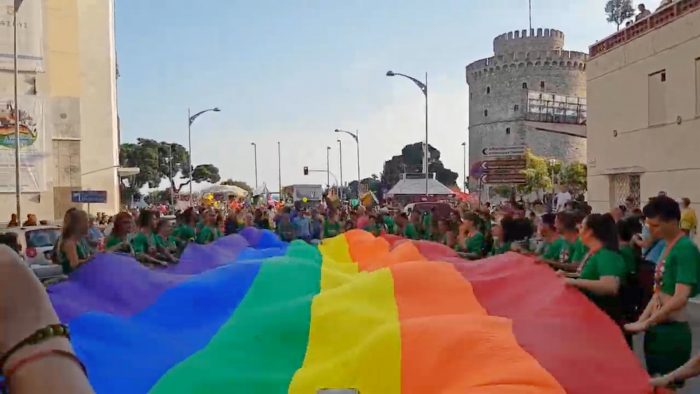 Thousands of people marched on the streets of Thessaloniki on Saturday, June 22 to mark the city’s 8th Pride celebration.
This year, Thessaloniki Pride commemorated the 50th anniversary of the Stonewall riots in New York, when people at the gay bar ”Stonewall Inn” resisted for the first time the systematic police violence against them.
Thessaloniki celebrations started in June 18 and culminated on Saturday, with the great Pride Parade in front of the city’s landmark, the White Tower.
This year’s events paid tribute to Zak Kostopoulos, a gay activist who was brutally murdered in Athens in 2018.
People were chanting ”Justice for Zackie”, calling the authorities to punish those responsible for Zak’s death.

The mayor of Thessaloniki Giannis Boutaris attended the parade and talked to patrons about Thessaloniki winning their bid to host EuroPride 2020.
”We competed against Hamburg, Brussels and a Swedish city and we won”, Boutaris noted, saying that these were cities with a much longer tradition in tolerating and celebrating diversity than Thessaloniki.
EuroPride is a European event dedicated to LGBTQI+ pride, hosted by a different European city each year.

Closest Supermoon in Nearly a Millennium This Weekend