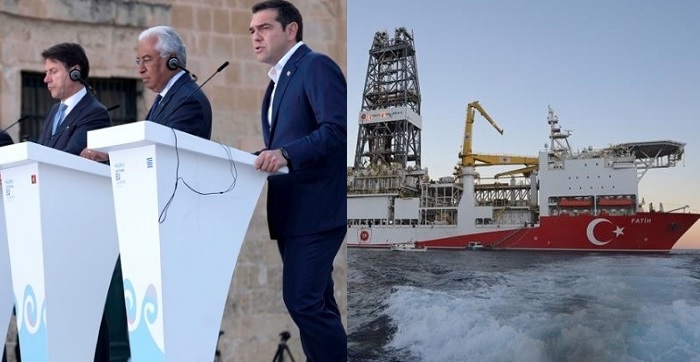 Heads of European Union Mediterranean states offered full support on Friday for fellow EU member Cyprus as Turkish Foreign Minister Mevlut Cavusoglu said that the country’s natural gas exploration vessel Fatih has started “drilling right in the west of Cyprus.”
Meeting in Valletta, Malta, the seven leaders attending the 6th South EU Summit reiterated their “full support and solidarity with the Republic of Cyprus in exercising its sovereign rights to explore, exploit and develop its natural resources within its EEZ,in line with EU and international law.
“We express our deep regret that Turkey has not responded to the European Union’s repeated calls condemning Turkey’s illegal continued actions in the Eastern Mediterranean and the Aegean Sea and express serious concern over actual or potential drilling activities within Cyprus’ EEZ.
We ask the European Union to remain seized on the matter and, in case Turkey does not cease its illegal activities, to consider appropriate measures in full solidarity with Cyprus,” the statement reads.
Greek Prime Minister Alexis Tsipras said: “It’s important to signal that the EU should take specific measures if Turkey does not stop its infringing behavior. Whoever doesn’t respect international law must suffer the consequences.” 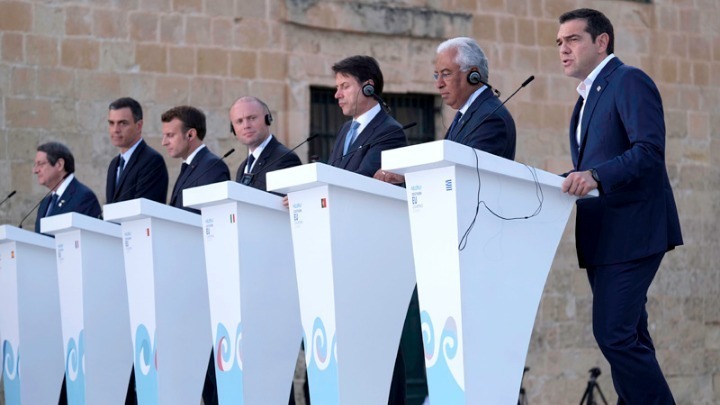 Cavusoglu: Cyprus gas exploration “invalid”
Earlier on Friday, Turkish Foreign Minister, Mevlut Cavusoglu, confirmed that Turkey has started to drill off Cyprus.
“We used to do seismic exploration because we didn’t have a drilling vessel. Now our Fatih 1 started drilling right in the west of Cyprus,” he said in an interview with Turkey’s state-run Anadolou news agency.
Cavusoglu added that Turkey is also sending a second ship to the area, because “despite all our warnings for years, the Greek side started unilateral exploration around Cyprus, seismic exploration and now drilling operations.”
Cavusoglu added that any Cypriot deal for oil and gas exploration in the Eastern Mediterranean that excludes Turkey is “invalid.”
He suggested however that a solution to the dispute could be reached through the EU.
“We asked [the Greek Cypriot side] to [begin drilling] only once the rights of Turkish Cypriots have also been secured, to which they replied, ‘but if we do this we would be recognising them’,” Cavusoglu said.
A gas deal between the two sides – and Turkey – would not signify recognition, Cavusoglu said, using the example of Taiwan which he said conducts trade and other agreements despite remaining unrecognised by many other countries.
The agreement could be “through a private company, or through the EU,” he suggested.
The Turkish Minister allegedly stated ”The Greek Cypriots should know their limits,” supposedly referring to Cyprus’ decision to issue international arrest warrants for the crew of the drilling ship “Fatih” if the vessel violates the sovereignty of the Republic and its Exclusive Economic Zone.