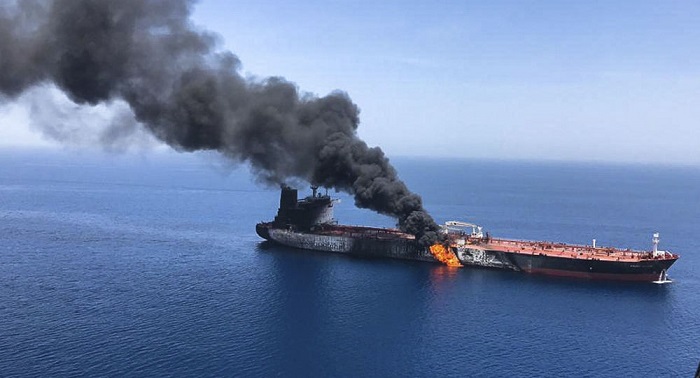 Greek shipowners, who control close to 25 percent of the world tanker fleet, are on alert following the attacks on two tankers belonging to Japanese and Norwegian firms in the Gulf of Oman earlier in the week.
One in five oil barrels destined for world markets is transported via the Gulf of Oman, and several Greek-owned tankers cross the narrow body of water each day.
As tensions and uncertainty increase, shipowners are still awaiting advice from the Greek government. The Ministry of Foreign Affairs in Athens has kept silent on the issue, perhaps partly because of the election campaign which is in full swing.
The United States says that Iran was behind the attacks because its surveillance directly observed an Iranian vessel remove an unexploded mine on the side of one of the oil tankers after the initial explosion. This would seem to imply that this was an attempt to remove evidence from the scene.
A high-ranking executive of the Greek shipping industry, speaking on condition of anonymity, said that currently all shipping companies are “trying to figure out what’s going on in order to take the appropriate measures, either to travel at higher speeds or to stay away from the Gulf of Oman altogether.”
Speaking with Proto Thema, the executive added that Greek companies are in contact with the charterers, i.e. the oil companies whose oil is transported, to assess the situation.
“But the cost of transport has been raised, as there are currently tankers in the Gulf waiting for instructions,” he explained.
The tanker fleet of Greek shipowners exceeds 130 million tons and is increasing in numbers  at an annual rate of seven percent, according to international analysts.
Approximately half of the Greek capacity increase seen since 2005, when it controlled 21 percent of the world’s fleet, is attributed to the acquisition of VLCCs (Very Large Crude Carriers), tankers with a capacity of more than 300,000 deadweight tonnage.