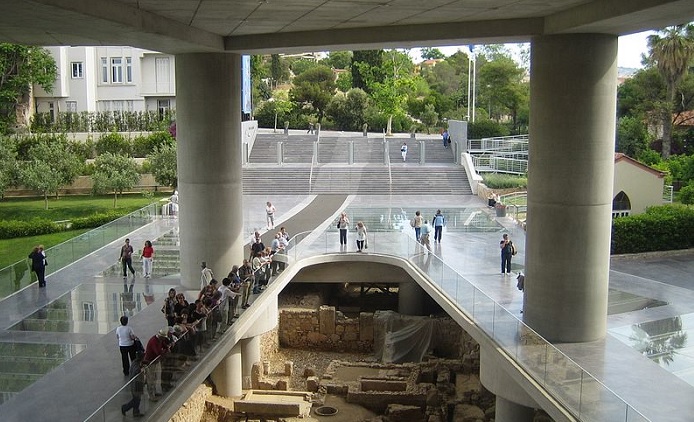 Athens’ Acropolis Museum will celebrate its tenth anniversary with several events, including a photography show, a lecture on ancient sculpture colors, a concert by famous Greek composer Stavros Xarchakos and the opening of a walk-through excavation of an ancient Athenian neighborhood.
The museum was founded in 2003, and it opened to the public on June 20, 2009. Nearly 4,000 priceless objects showing the panorama of Greek history through the ages are exhibited over an area of 14,000 square meters.
A schedule presented by museum director Dimitris Pantermalis in a press conference on Wednesday highlighted the following events.
An excavation of an ancient Athenian neighborhood, visible under transparent walkways at the entrance to the museum, will be opened to the public on Friday, June 21. The new site will allow visitors to walk on a metal corridor shaped like the Greek letter pi above the 4,000 square-meter (43,000 square foot) area, and gaze down at the ancient neighborhood which thrived from the Classical era to Byzantine times.
Visitors will see original homes, workshops, baths and streets, all of which have been painstakingly excavated, Dr. Pantermalis said. “Essentially, it consists of a new level to the museum that will provide information about the daily life of Athenians, under the shadow of the Acropolis,” he explains.
A lecture by professor Giovanni Verri will be presented on the subject of the paint colors used on the ancient Greek sculptures of the Parthenon. Verri uses advanced techniques to analyze remnants of paints on ancient sculptures and buildings, and has proven that the frieze and the pedimental sculptures of the Parthenon at the British Museum were originally painted “Egyptian blue.” The lecture will be held at the museum’s amphitheater on Thursday, June 13 at 7:00 PM.
Composer Stavros Xarchakos will give a free concert on June 19 at 9:00 PM in the museum’s courtyard, which will be devoted to the works of Mikis Theodorakis, Vassilis Tsitsanis, Markos Vamvakaris and Manos Hadzidakis. The museum will remain open until midnight on that day, with free entrance starting at 8 PM.
Photographs of marble stone cutters and carvers working on the preservation of the Acropolis, pictured both on the ground and on high scaffolding, will be on show from June 11 to October 31. Dr. Pantermalis says that the photos “sometimes bring to mind those who built the Parthenon over 2,500 thousand years ago.”
The historic corner building on Mitseon and Hadzichristou Streets near the museum will open to the public on June 18 at midday to show the library of late archaeologist Giorgos Despinis, the core of which is devoted to classical sculpture. This will serve as a study center for the museum and for any researcher or student working in specialized studies.
Entrance to the Museum will also be free on Thursday, June 20, to celebrate the anniversary of its opening, from 8:00 am to 8:00 PM.
Source: AMNA