Tsitsipas Knocked Out of French Open After Titanic Battle (video) 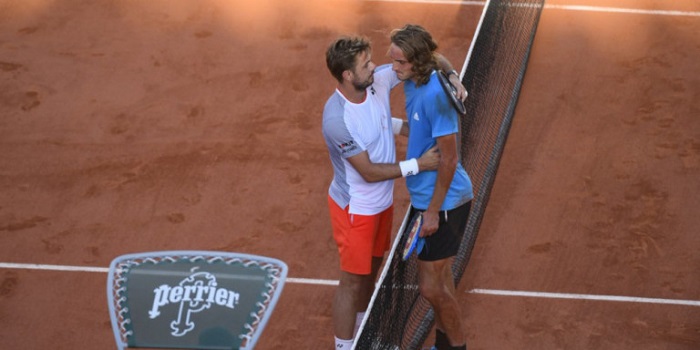 Stefanos Tsitsipas battled for five hours and nine minutes against 2015 French Open champion Stan Wawrinka, eventually succumbing 7-6(6), 5-7, 6-4, 3-6, 8-6 in the round of the last 16 at Roland Garros on Sunday.
The 20-year-old Greek champion was in uncharted territory as he had never even played a four-hour-long match in his entire career.
“It’s been a long time since I cried after a match, so emotionally it wasn’t easy to handle,” a devastated Tsitsipas reflected. “I will try to learn from it as much as I can.
“I feel exhausted. I never experienced something like this in my life. I feel very disappointed at the end.”
The titanic clash will go down as one of the greatest matches of the year, as the Greek and Swiss men traded baseline blows and one-handed backhands for more than five hours. Wawrinka fought off eight break points in the deciding set, including a 0/40 look for Tsitsipas in the opening game.
Just one year ago, Tsitsipas was sitting at No. 39 in the ATP rankings. Now, seeded sixth and surging inside the Top 10, the reigning Next Gen ATP Finals champion can take a lot of positives from a strong run at the clay-court Grand Slam. But following the encounter, an exhausted Tsitsipas was unable to process what had just transpired. It was all a blur.
“My mind is so empty right now. I cannot even think. I was so close, so close. I give him room to do whatever he liked on all those break points. So many break points. So many. I didn’t play them. I was expecting someone else to play them for me. I didn’t play them.
“It’s the worst feeling ever. Especially when you lose. You don’t want to be in my place.”
Despite the loss, Tsitsipas enjoyed his best result ever at Roland Garros. Victories over Maximilian Marterer, Hugo Dellien and Filip Krajinovic have him edging towards a Top 5 breakthrough in the ATP Rankings.