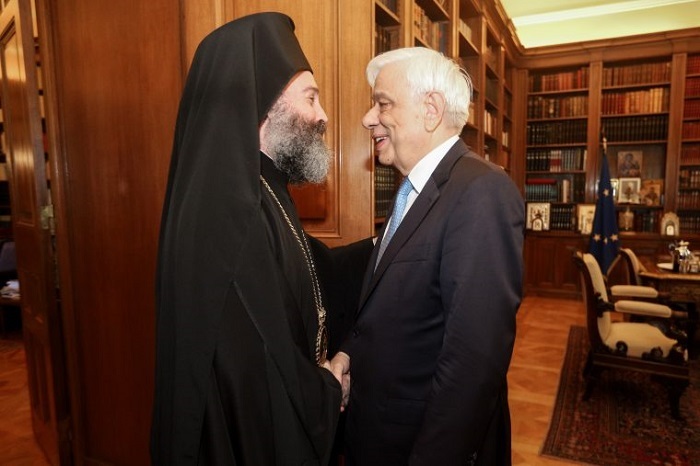 President of the Hellenic Republic, Prokopis Pavlopoulos, on Sunday received the Archbishop of Australia Makarios at the presidential mansion and congratulated him on his enthronement. The Greek president wished the newly-elected archbishop every success in his new role at the helm of the Archdiocese of Australia.

“Above all, your mission concerns the support of the Archdiocese of Australia and the great and so creative Greek community there. Secondly, the support of the Patriarchate itself in these critical times, something that is very important for all Orthodoxy,” Pavlopoulos said.

He also praised the Archbishop’s many accomplishments, especially his deep knowledge of the discipline of Bioethics, noting that cloning had been the subject of his postgraduate thesis at the University of Crete Medical School.

Archbishop Makarios thanked President Pavlopoulos and said that he was keenly aware that his role as Australia’s archbishop was “not just religious but also national.” He also stated his intentions to connect Australia’s Greek community with the Ecumenical Patriarchate and to “keep its spirit alive throughout the continent.”

Makarios also asked the Greek President to “make every effort” to reopen the School of Theology on Halki, extracting the president’s promise to do his utmost in this direction, and to enlist the help of the European Union in support of the cause.

President Pavlopoulos stated in reply that “The great importance of Orthodoxy for the support of fundamental principles and values in our time goes beyond the faithful… This must be understood by the EU, by our great European family. All together, we will fight for this just demand… which must also be a European demand, a demand of our culture itself.”