Defiant Tsipras Goes Ahead with Appointing Top Judges, Despite Outcry 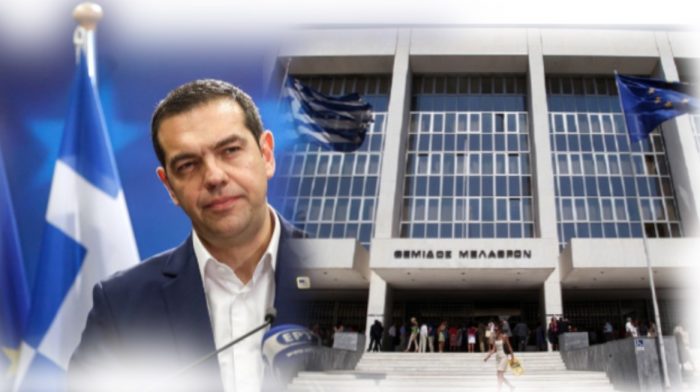 Greek PM Alexis Tsipras announced to his cabinet on Friday afternoon that his government will go ahead with its decision to appoint Greece’s new top judges, despite calls from experts and the opposition to wait until the new government takes office.
Premier Tsipras reportedly said that procedures for the pre-scheduled change of the top Greek judges, whose four-year tenures expire on June 30, already began long time ago in the Greek Parliament, and it must be concluded. The remarks were made in a long cabinet meeting which lasted for several hours, and took place without the presence of any members of the press.
Tsipras accused the main opposition New Democracy Party of planning to ”cover illegal interests and to take revenge,” referring to ND’s decision to ask the government not to appoint the new judges on June 30, just one week before the snap elections of July 7.
Tsipras’ clear innuendo meant that, according to SYRIZA, ND wants to appoint judges who would be close to its leader’s ideology and interests.
During his speech to the ministers, the Greek premier expressed his disappointment over ND’s refusal to agree on any judge, and added that he asked his Justice Minister to send a letter to the Leader of the opposition in order to choose mutually-agreed-upon judges.
Ideally, the candidates would be chosen jointly between SYRIZA, ND and the rest of the political parties.
Tsipras also accused New Democracy of arrogance and political disdain, reportedly saying, ”let the Greek people draw their own conclusions and judge ND’s stance.”
According to media reports, Tsipras’ government intends to appoint Irene Kalou as the new President of Areopagus, Greece’s Supreme Civil and Criminal Court, and Demetra Kokotini as the new District Attorney for the Areopagus.
The Opposition now is now calling on the President of the Republic, Prokopios Pavlopoulos, not to sign on to the Government’s decision. However, it remains unclear whether or not the President will listen to these calls.
The Areopagus, or alternatively “Areios Pagos,” literally means the “Stone, or Hill, of the God Ares.”
As Greece’s Supreme Court, it has great power because its decisions are irrevocable. However, cases ruled on by the Areopagus can still be brought before the European Court of Human Rights, which has the power to overturn them.