By Tasos Kokkinidis
May 28, 2019
Facebook
Twitter
WhatsApp
Linkedin
Email
The Chinese demand for Greek property remains close to historic highs, despite the European Commission’s recent call for a crackdown on potential abuses of European Golden Visa programs, says Carrie Law, director of leading Chinese real estate company Juwai.
Chinese enquiries into Greek property have been dropping since the third quarter of 2018 when they reached an historic high, but Law expects overall demand to remain strong.
“The level of Chinese buyer enquiries in the first quarter was down from recent peaks, but is still near historic highs. We expect demand to remain strong throughout 2019,” she explained. 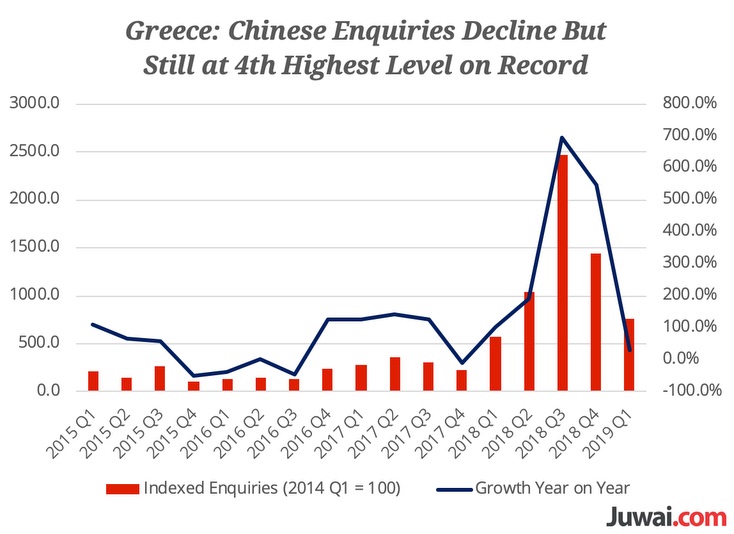 The Golden Visas is a program in which countries offer residency, or even citizenship, to foreign nationals in exchange for real estate investment. Twenty of the EU’s 27 countries offer Golden Visas. Requiring a minimum real estate investment of just EUR 250,000, Greece is the least expensive option which also includes visa-free travel within the Schengen Area.
The European Commission is worried that organized crime elements, money launderers, and terrorists will use the program to “clean” their funds and gain access to the visa-free Schengen area of Europe — where they can be free to commit more crimes.
“We see no likelihood that the popular Greek Golden Visa program will be ended or made much more difficult for typical Chinese applicants. The EU does not have regulatory authority to eliminate the program,” says Law.
However, she notes that the Greek parliament has tightened up some of the looser conditions around the Golden Visa. For example, potential buyers can no longer pay in installments, they can no longer resell the property within five years, and point-of-sale transactions are no longer permitted.
“Chinese investors received 2,416 out of the 4,154 Greek permits issued so far. Chinese account for more than five times the 428 issued to the second-ranked Russians. I don’t see any reason to expect Chinese preponderance in the program to fall much in 2019,” Law adds.