GRNews
GreekReporter.comGreeceGreece Breathes a Sigh of Relief as Golden Dawn Thrashed in EU... 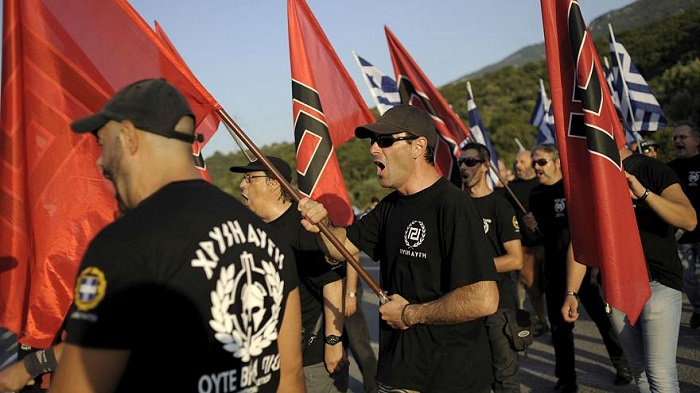 Mainstream Greek politicians welcomed the weakening of extreme rightist party Golden Dawn on Monday, which saw the loss of close to 60 percent of its electoral base in the European elections held on Sunday.
The party which received more than half a million votes, representing 9.4 percent of the electorate in the 2014 elections for the European Parliament, garnered less than 5 percent in votes five years later. The extreme rightist party will still be able to send two MEPs to the European body.
Ilias Kasidiaris, one of Golden Dawn’s most prominent figures, has also failed to reach the second round of the municipal elections in Athens, coming in fourth place.
Despite the shrinking of its voter base, Golden Dawn still remained relatively popular with young Greeks, capturing as much as 11 percent of the votes of citizens between 14 and 24 years old in the country.
Although its leadership rejects the labels of neo-Nazi and fascist, gangs of Golden Dawn members have in the past terrorized migrants and members of human rights groups.
Following an investigation into the 2013 murder of Pavlos Fyssas, an anti-fascist rapper, by a supporter of the party, its leader Nikos Michaloliakos and several other Golden Dawn MPs and members were arrested and held in pre-trial detention on suspicion of forming a criminal organization.
The trial began on April 20, 2015 and is stillongoing as of this point in 2019.