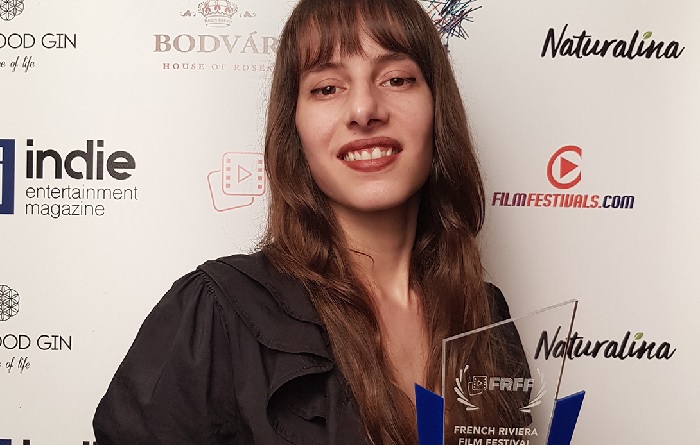 The Greek progressive rock and metal artist Oh. (Olivia Hadjiioannou) was honored earlier this week by a prestigious international jury in Cannes for her music video “Red Lion” from the album, “Metallia.”

The two-day festival held at the time of the annual Festival de Cannes included screenings, VIP receptions, an award ceremony and closing gala. The award was presented by Gotham Chandna, founder of Cloud 21 International and Nicole Muj, founder of Kultura PR International.

In accepting the award, Olivia stated, “I am truly honored to receive this award and to have represented Greece at the French Riviera Film festival in Cannes. Today’s commercial music and film industries present difficult challenges to indie composers, musicians and directors if they are to succeed and be profitable.

“I am grateful to film festivals like FRFF, which welcome new works, celebrate originality and promote creative freedom,” she added.

Video director Olivia Hadjiioannou, working as the artist Oh., has been honored several times for her ingenuity, innovation and creativity in music and video with multiple international awards.

She made her debut as Oh. on the international music scene with the award-winning music video “Trials” in 2013, which was cited as one of the 50 top events to mark Greece during the economic crisis.

With the advances in immersive video, she released her single “Love of Avalanches,” which was mentioned in Huffington Post as one of first 360-degree immersive VR videos released by a Greek artist on YouTube in 2016.

Besides winning Best Music Video at the French Riviera Film festival in Cannes, “Red Lion” is presently a winner and official selection in a total of ten film festivals around the world.