Greek-American man Philip Nicozisis, a prominent Palm Beach entrepreneur, became a “digital nomad” during a year-long odyssey which took him to twelve cities on four continents.

His travels are documented in the new book “Have Laptop Will Travel,” which has become a best seller in seven countries. 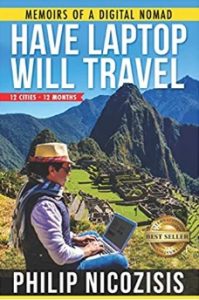 His wonderful and witty tale of travels to the less-explored areas of our beautiful world has been successful because, as he says in an interview with the Greek Reporter, “it strikes a chord in the aspirations of people. People love to travel.”

He traveled from Japan and Thailand to Peru and Argentina, documenting different and often contrasting lifestyles and cultures.

His book takes the reader around the world with vivid descriptions of the cities that he lived in, which has been described as “twelve books in one”.

Nicozisis, the chairman of Nico Properties Group, a successful commercial real estate investment company, kept an open mind while holding strong to his American values. This intrepid traveler learned to love each city — imperfections and all — as a resident, not a tourist. “I tried to write about the good and the bad. But even when things were looking grim, like when I broke my foot in Argentina, I would’t change a thing about my remote year abroad.”

Asked which is his favorite city, Nicozisis says:

“It’s like asking parents, ‘who do you love more, your son or your daughter?’ But, if I had to choose I would pick Kyoto, Japan.”

“With Japan, I came upon a culture that was so different. If I had to sum up Japan in one word, it’s ‘Respect.’ Respect, punctuality, perfection, and non-confrontation are embedded in the culture and how they conduct themselves with each other.”

He admits that the two months spent in Argentina were exciting, but they were the most difficult for him. “By months seven and eight I was getting travel weary and really missed home. In Argentina, the days start and end late. Coffee shops do not open until 9 or 10. People go out to dinner after 10 or 11. But the worst part was the runaway inflation that affected everyday life. In the two months we were there, inflation rose by a whopping 23 percent.”

However, Argentinians won him over, eventually. “Argentina is a kissing culture. When the people arrive at work, they spend the first half an hour going around kissing everybody.”

“Even though I had a bit of a culture shock, the Argentinian people kissed their way to my heart,” Nicozisis said.

He admits he is a lucky man. Being able to keep working while traveling is out of the question for most. However, work patterns are changing, he says. “There is a whole new economy based on people working remotely… People can earn their livelihoods from anywhere in the world as long as they have access to wi-fi, a laptop and a smartphone.”

His busy and demanding role in managing properties in five states was not compromised by his physical absence during the year he spent traveling. “I was able to manage the properties remotely,” he said.

“Many of the 48 people I traveled with in this year-long odyssey also held down jobs or ran their companies remotely. Among them were Hollywood agents, bloggers, journalists, computer programmers and headhunters…Things got interesting when our days were flipped because of the time zone difference in Asia. Sometimes you had to have a conference at 3 a.m., Kyoto time, which was 2 p.m. back home.”

Nicozisis’ parents have deep roots in northern Greece. His dad comes from Sopiki, a small village of about 80 people just inside the Albanian border. His mother’s family originates from Kastoria.

Apart from traveling and managing his business remotely, the second-generation Greek man is a passionate vegan. He is a public speaker on veganism and a credentialed Hippocrates Health Educator from the Hippocrates Institute, a 64 year-old non-profit organization which offers comprehensive wellness programs based on plant-based eating.

Living in twelve cities around the world one month at a time was a cinch when it came to his vegan diet. He used the “Happy Cow” app, which is like Yelp for vegans, to find plant-based restaurants and grocery stores.

“A plant-based way of eating is quite easy around the world. For example, the Japanese were basically vegans until after WWII. We introduced meat, dairy products, and eggs as a result of the War. They typically ate fish once or twice a month and on holidays. In the blue zones this is still true. By contrast, Argentina is meat-oriented.”

Being Greek and vegan are not contradictory, he says. Quite the opposite: Classical Greeks were mostly vegans, and ancient philosophers like Hippocrates, Pythagoras, Socrates and Plato knew “that a vegan diet was right way for a good mind, healthy body, and a peaceful society.”

When asked how his Greek family reacted to his choice to become a vegan, Nicozisis told the Greek Reporter that they were not only supportive, but that his parents have also become vegan.