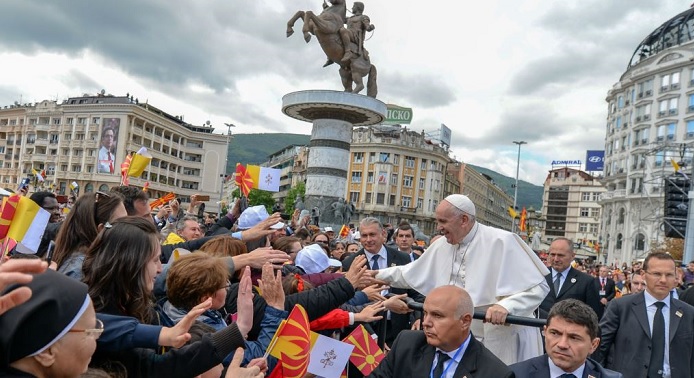 Pope Francis, who is on a historic first trip to North Macedonia, has met with the country’s leadership and held Mass in the main square of the capital, Skopje.

He has sought to encourage the country’s drive toward integration into the EU and NATO after its name change resolved a decades-long dispute with Greece last year.

In meetings with outgoing President Giorgi Ivanov and with Prime Minister Zoran Zaev at the presidential palace, Francis praised North Macedonia’s multiethnic and multifaith culture, calling it an example of peaceful coexistence and a bridge between East and West.

“These particular features are also highly significant for increased integration with the nations of Europe,” he said.

“It is my hope that this integration will develop in a way that is beneficial for the entire region of the Western Balkans, with unfailing respect for diversity and for fundamental rights,” Francis added.

North Macedonia, country of 2.1 million, is mainly Orthodox Christian. But it also has a large community of ethnic Albanian Muslims, who up make about one-quarter of the population. It is also home to an estimated 15,000 Catholics.