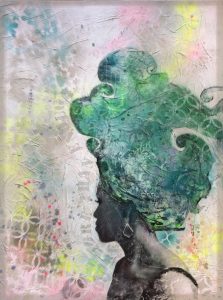 Most female celebrities have been portrayed through the eyes of male artists and photographers. Their imagery was originally created to idolize women as objects of desire. Psoinos wants to show a different point of view.

Inspired by Octavio Paz’s short story by the same name, this series tells the story from a woman’s point of view, depicting the “Wave” in its different moods through pop culture.  Layer upon layer, Psoinos reconstructs recognizable imagery of female celebrities to showcase each woman’s multifaceted psyche as driven, dynamic, beautiful and seductive but above all, powerful… as all women are!

A mixed media lightbox delivers a message when lit, displaying one of Ms. Obama’s inspirational messages, “You’re more than enough.”

In speaking with Psoinos, she tells us how she finds it important to inspire and empower other women, and especially young girls, of all races and social and economic strata.  “We women have come a long way, but we haven’t yet established our rightful place as equals, and as Ms. Obama says: ‘There is nothing that we, as women, can’t accomplish.’

“Through my work, I wish to show women that we are powerful, we are deserving and we are here to support each other, empower each other because we can.”

Psoinos last showcased her work at the vignette of Paris K Design for Design on a Dime, a charity event which takes place annually at the Metropolitan Pavilion in New York City.

She is currently participating at Art New York during Frieze week May 2-5, at Pier 94, represented by Steidel Contemporary.