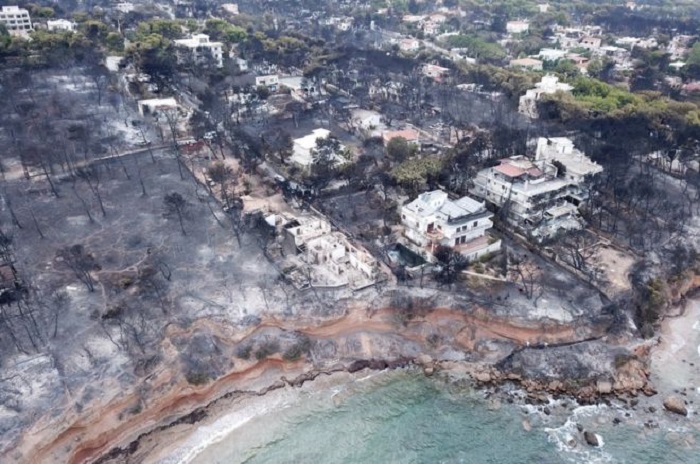 The Greek government is under renewed pressure over the deadly July 2018 fire at Mati following a new documentary aired on Thursday. The film brought to light the and shortcomings, and at times, outright negligence, of the authorities in their response to the inferno.
The film, by prominent Greek journalist Alexis Papahelas, aired on Skai TV. It included previously-unheard testimony from firefighters confirming to their superiors the rising death toll on the evening of July 23, 2018, while Prime Minister Tsipras and members of his cabinet  were playing down the incident.
Kyriakos Mitsotakis, the leader of the New Democracy Party,  decried “the indifference for human life and cynicism” of authorities who postponed the announcement of the growing death toll, in a post he made on Facebook.
The centrist Movement for Change (KINAL) party also commented on the documentary, noting that it proved once again that PM Alexis Tsipras and his ministers had concealed the actual numbers of the death toll in their initial public speeches about the tragedy.
“It was not just a show of cynicism and callousness but a conscious attempt to distract and defraud citizens,” KINAL said, adding that the premier was responsible.
As of May, 2019, 100 people have been confirmed dead in the hellish blaze. The fires were the second-deadliest wildfire event anywhere in the world in the twenty-first century, after the 2009 “Black Saturday” bushfires in Australia which killed 180 people.
Over 700 residents were evacuated or rescued, mainly from the seaside villages and towns located north of the port town of Rafina. The villages of Kokkino Limanaki and Mati, were particularly hard-hit, and rescuers found the bodies of 26 people trapped just meters away from the sea in Mati, apparently hugging each other as they died.
Boats also rescued hundreds of people from beaches and the sea, and later recovered corpses from the water. Ten people drowned when the boat rescuing them from a hotel in Mati capsized. Μore than 4,000 residents in total were affected in some way by the wildfires.