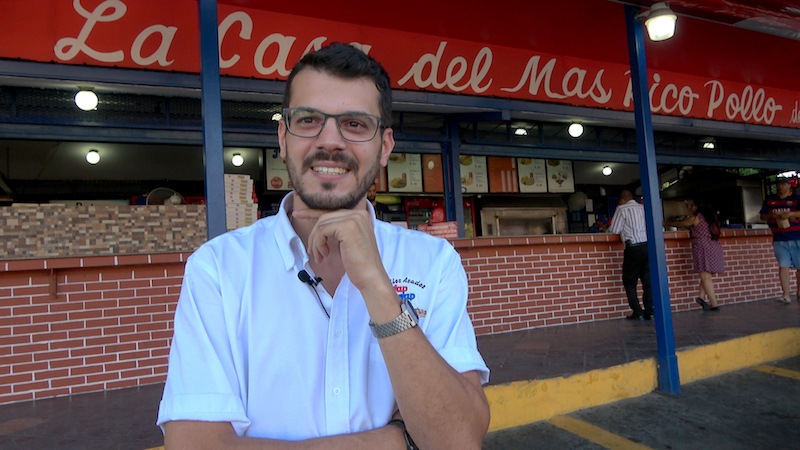 One of the most iconic Panamanian chicken & meat grills in Panama City is actually owned and operated by a young Greek who continues the tradition set down by his grandfather.

“There is no Panamenian who hasn’t eaten in our family’s restaurant,” says Panagiotis Dimaras, who was born in Greece.

“Jap Jap” opened in 1989 as a single take-out eatery, but it now includes five outlets throughout Panama operated by family members.

It has come a long way from when Dimaras’s grandparents, immigrants from Greece, created the first Jap Jap establishment at Chanis, an area just outside the center of Panama City.

Grilled chicken, as well as the local favorite food Choripán, a type of sandwich with chorizo, are the main items on the menu, but there is also the iconic Greek specialty of souvlaki.

“Souvlaki is loved by the Panamanians. It has become part of the eating culture here,” Dimaras says.

Dimaras returned to Panama in 2012 to take over the family business. “It was a big change to move from Greece and settle so far away in Panama, but because I have roots here, it was easier for me than perhaps other Greeks that immigrated here,” he explains.

“I want to continue the tradition of my grandparents and expand it… Perhaps we can add another five outlets to our franchise,” Dimaras says.

However, the restaurateur admits that he misses Greece. “I miss the food, my neighborhood, my friends… In the future, I would like to return to Greece and start a similar venture there.”

The Greek community in the Central American nation is small, but it is active and vibrant. A society of no more than one thousand souls has already made its indelible mark on the economy, politics, gastronomy and culture of this beautiful, verdant country.

The first Greek citizens immigrated to the Central American country of Panama in the late 1800’s, most lured by jobs related to the construction of the Panama Canal.

The Greek presence has been strengthened over the intervening decades as Greek shipping gradually conquered the world, and many shipowners chose to sail their vessels under the Panamanian flag.