Athens' Airport Keeps Up The Tradition of Promoting Greek Culture, Literature, and History

By Nick Kampouris
April 20, 2019
Facebook
Twitter
WhatsApp
Linkedin
Email
”Eleftherios Venizelos”, the International Airport of Athens, showcases and promotes Greece’s history, literature and culture for more than eighteen years now.
Since the beginning of its operation in 2001, the new international airport of Athens keeps up the tradition of promoting Greece’s cultural wealth with more than eighty permanent and temporary events and exhibitions in its premises.
Chara Mitsotaki, the airport’s Public Relations and Culture department head, spoke on Thursday with the state-run AMNA news agency and explained the importance of these events, giving useful information for the ongoing exhibitions.
Permanent exhibits at the airport include one with 172 artifacts dating from the Early Neolithic to the Post-Byzantine eras, found during the construction of the airport.
A cluster of copies of antiquities from the Acropolis Museum, with outstanding samples of ancient Greek art, are also exhibited in an area designed by an award-winning architect. They provide a glimpse into what a visitor to the actual Acropolis museum could see.
Modern history and Greek literature are also at the core of the airport’s exhibitions and events, with the latest initiative being the “Athens as a Book” project. 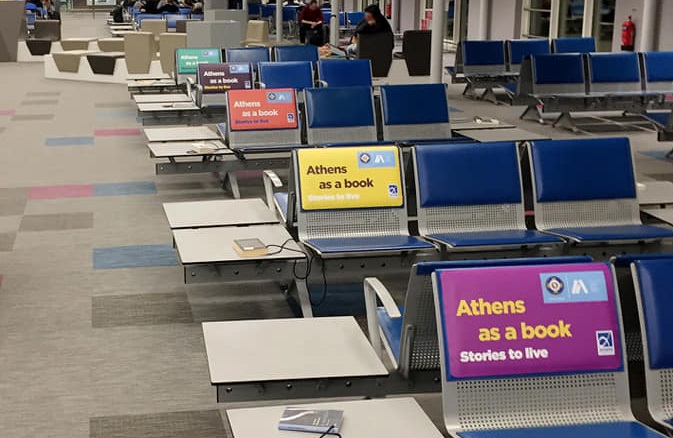 According to this, travelers can find copies of modern Greek literature in Greek or in English placed next to the seats in waiting lounges.
In addition to these, the airport has currently two temporary exhibitions on show and an ongoing program:
The first is called “Destinations” and will be running until July 14, 2019. It is a collaboration with the National Theater of Greece.
Photographs and costumes belonging to the Theater are on show at the Departures Level, Entrance 3.
The second is called “Stories of Athens” and will be running until July 30, 2019. It is a collaboration with the Children’s Art Museum.
It showcases objects made by children and a 20-minute video showing 90 art pieces that narrate life in Athens through the eyes of children aged 4 to 14.
The ongoing program called “Fly Me to the Moon,” is a collaboration with ελculture, a cultural online platform.
The initiative began six years ago and runs every year at the airport. It includes music, theater performances, gastronomy, and cultural events to promote Greek culture.
(With information from A.M.N.A.)