The Akathist Hymn: A Lyric Poem of Unparalleled Beauty Echoes in Orthodox Churches 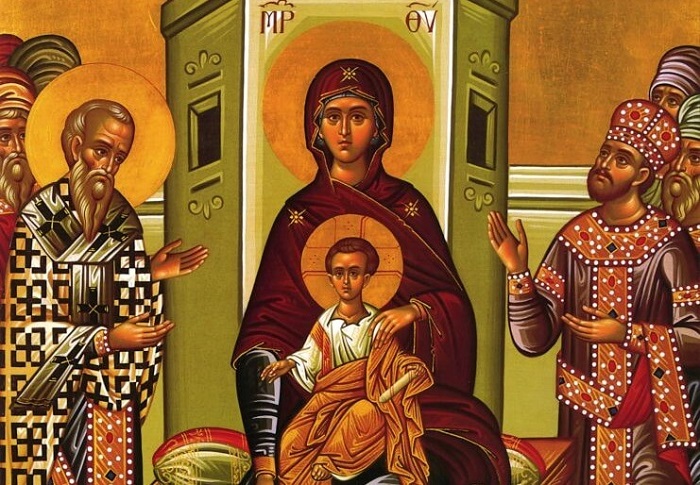 The Akathist Hymn, which is chanted on the first five successive Fridays of Lent in the Eastern Orthodox Church, is a profound devotional poem dedicated to the Virgin Mary.
Devotional hymns to the Theotokos are as ancient as the first Christian church. The Byzantine Empire from its very inception in Constantinople during the fourth century, closely allied itself to the Virgin Mary, and always sought Her protection and intercessions.
The Akathist Hymn, which in its present form is the work of many different ecclesiastical hymnographers, existed even before it was formally accepted by the Church in 626 AD.
The Kontakion “To the Invincible Champion… we ascribe the victory” was added at that time. It came to be known as “The Akathist Hymn” because of the following miracle, which was attributed to the intercession of the Theotokos.
The Emperor of Byzantium Heracleios was starting out on an expedition to fight an incursion of the Persians on their own lands, when there suddenly appeared barbaric hordes, consisting mostly of Avars, outside the walls of Constantinople.
The siege lasted several months, and it was apparent that the outnumbered troops of the Queen City were becoming desperate. However, as history records, the faith of its people made the impossible, possible.
The Venerable Patriarch Sergius, accompanied by clergy and the Byzantine official Vonos, marched unceasingly along the great walls of Constantinople, holding an icon of the Theotokos, which bolstered the faith of the defenders of freedom when they saw it. And the hoped-for miracle came soon after.
Suddenly, as the chronicler narrates, a great storm with huge tidal waves destroyed most of the enemy fleet, and a full retreat from Constantinople ensued quickly thereafter.
Seeing this miracle take place before them, the faithful of Constantinople spontaneously ran to the Church of the Theotokos at Vlachernae on the Golden Horn. With the Patriarch Sergius officiating, they prayed all night, singing praises to the Virgin Mary — without even sitting down. Hence the title of the Hymn “Akathistos”, which means in Greek “not seated.”


Although the Akathist is a strictly Orthodox service which originated from a historical event involving Byzantium, it has been highly honored by other Christian denominations. The deeply emotional poem has been metrically translated by outstanding poets in English, Latin, German, Russian, Rumanian, Arabic, French, Italian, Spanish and other languages.
The great appeal of the Akathist Hymn is due to the lyric quality of the composition as well as the simplicity of the plot: the happy mystery of the Incarnation of the Logos of God. This is the theme of a recent presentation on the study of “The Bible as Literature” at Indiana State University by scholar Emmy Karavellas.
She said that it relates to man’s absolute need to glorify and praise what is sacred, and especially the Incarnation of the Lord through the Virgin Mary. This tendency of mankind to incarnate the supernatural — and “immaterialize” what is material — gives people a sense of deliverance, which we all seek and yearn for in our lives.
Year after year, people crowd the Orthodox churches on Friday evenings to listen to this wonderful service which has the power to bring human beings closer to their Creator and whose music, rhyme and meter instill in them a spiritual euphoria.

The iconic hymn has also been sung by popular Greek singer Glykeria.

Was 1821 a Greek Revolution or a War of Independence?

The Greek War of Independence was the subject of an online lecture co-hosted by the Consulate General of Greece in Boston and College Year in Athens.
Greek News

Greece announced on Saturday 2,301 new cases of coronavirus and 41 fatalities., while a total of 452 patients remain intubated in ICU.
Hollywood