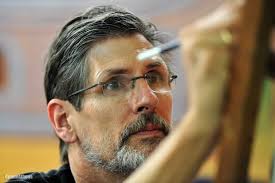 “Watching the Detectives” is a gritty and imaginative modern take on the classic crime story, which takes place in Toronto. Its story showcases the neighborhoods and people rarely seen or represented onscreen.

Four streetwise friends, George Stroumboulopoulos and real-life musicians Michie Mee, a Canadian Rap pioneer, Ia Campeau  (DJ NDN of “A Tribe Called Red” fame) and Father Nikos Petros, with a history of protecting at-risk youth, must save a kid under their care when he accidentally steals precious underworld secrets from Toronto’s most dangerous gang leader.

Having this info in his possession puts the young man in grave danger and he goes into hiding. The “detectives” have to find him fast, or he will die. The series unfolds with each new revelation opening up yet another mystery. Before long, the detectives find themselves in mortal danger.

They fight their way through angry gangs seeking revenge, rival assassins hired to find the young man, and a criminal organization that seemingly knows their every move. The show grows increasingly surreal as the Toronto underground reveals a deep secret, known to only a few.