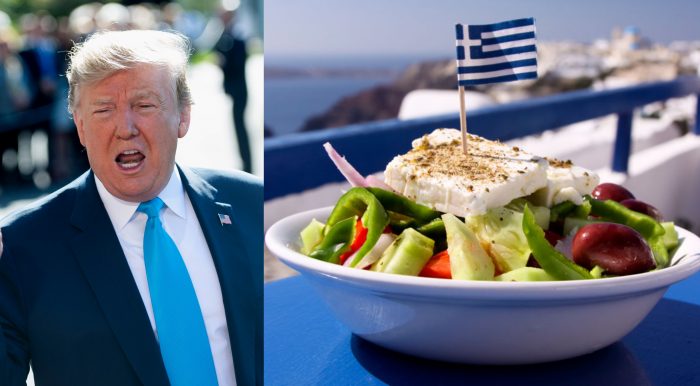 Greece’s Agricultural Development and Foods Ministry announced on Wednesday that it gained an exemption from an approximate ten percent levy on Greek feta cheese from the US’ Trump administration.
The American government plans to impose tariffs on EU products worth eleven billion dollars in response to EU’s subsidies to Airbus, a European aviation industry, which is a main competitor to the American company Boeing.

The World Trade Organization finds that the European Union subsidies to Airbus has adversely impacted the United States, which will now put Tariffs on $11 Billion of EU products! The EU has taken advantage of the U.S. on trade for many years. It will soon stop!

The US government has agreed to exempt the popular Greek cheese from the new round of tariffs against EU products which is expected to take effect soon.
The state-run AMNA news agency reported on Thursday that the American Customs and Border Protection Agency informed the Greek Embassy in Washington that it will revoke its decision to ”reclassify customs duties on importing sheep-originating cheese” from Europe.
This decision actually denotes the exception of feta cheese from the tariffs.
The Greek side claims that this was a result of a swift and well-coordinated action from the country’s Ministries of Foreign Affairs and Economy.
Commenting on the development, Stavros Arachovitis, the Agricultural Development and Foods Minister, noted that ”the protection of feta cheese and, by extension, Greek livestock farming and production… is at the heart of our policy for an extroverted agricultural foods sector that will produce added value for producers and the country.”
This new and positive development for Greece seemingly comes as a result of the improved, warmer relations that have been forged between Washington and Athens over the last several years.