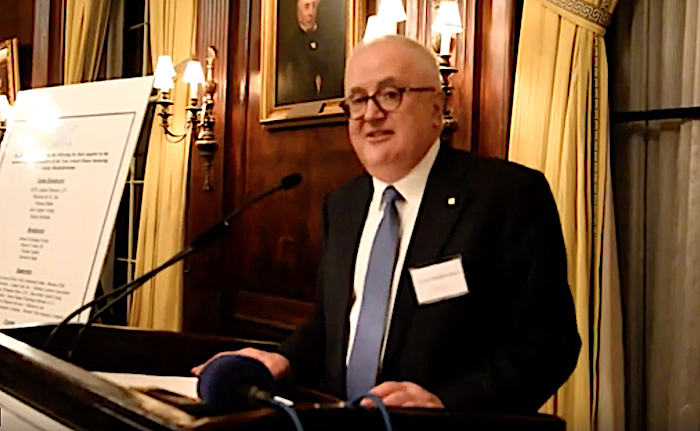 The Hellenic American Association for Professionals in Finance (HABA) honored Dr. George Handjinicolaou, Chairman of the Board of Directors at Piraeus Bank and the Athens Stock Exchange, as its 2019 Executive of the Year.

In the ceremony which took place on Thursday, April 4th at the Union League Club of New York, Handjinicolaou, who returned to Greece in 2011 after a distinguished career in the US and the UK, said that his return coincided with the onset of the Greek economic crisis.

He noted that Piraeus Bank was now “making a difference, by strengthening the institutional framework in Greece, which is a necessary condition for sound economic decision-making.

He also referred to the new vitality in the Greek economy from young entrepreneurs, to whom he has imparted a more global knowledge of international markets, while he noted the importance of developing tourism and exports.

HABA has honored prominent Greek-American executives in the business, private and public sectors who have distinguished themselves in their fields of endeavor since the year 1992.

Dr. Handjinicolaou’s illustrious career in the financial services sector spans over thirty-five years, the vast majority of which was spent at global financial institutions based in London and New York.

He held the position of Deputy CEO of the International Swaps and Derivatives Association in London for six years, from 2011 to 2016, where he was also a member of the board of directors.

For over 25 years prior to that time, Handjinicolaou held senior management positions in the derivatives and fixed income markets at several global financial institutions including Dresdner Kleinwort Benson, Bank of America, Merrill Lynch and UBS in London and New York.

The banker began his career at the World Bank in Washington, DC.

Dr. Handjinicolaou received his PhD in Finance from the Graduate School of Business at New York University, where he also earned his MBA. He also earned a BS degree from the University of Athens Law School in Greece.

He also serves as Chairman of the Piraeus Bank Group Cultural Foundation, a non-profit charitable institution.

HABA was established in 1982 to promote the professional and educational interests of Hellenic-Americans and Philhellenes who are involved in the financial sector.

On April 6, 1896, the first modern Olympics were held in Athens, Greece at the Panathenaic Stadium, featuring athletes from 14 countries.
Ancient Greece

Each year, hundreds of people gather on Mount Olympus for the annual Promitheia festival dedicated to the Ancient Greek spirit.