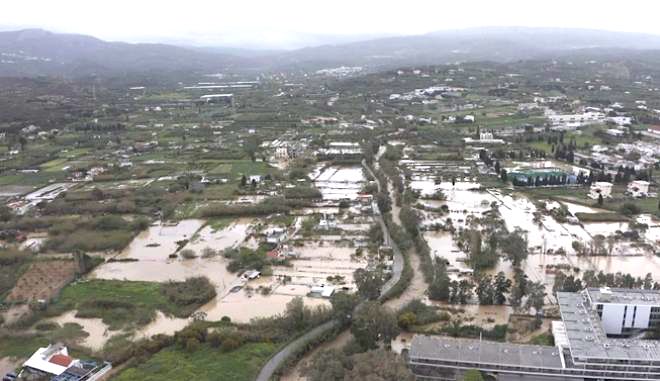 The torrential downpour on Saturday caused floods and damages in Crete, with the Sitia and Ierapetra areas suffering the most, as human lives were put in danger.
More specifically, roads, homes and shops were flooded in the prefecture of Lassithi, with several people trapped while others had to be transported by boats to escape flooded areas, according to Neakriti.gr.
The Livadia area in Sitia also faced similar grave problems, with local authorities putting the entire area on red alert for Sunday. The Fire Brigade and volunteers worked all night to rescue people and pump water from homes and shops.
The Fire Brigade rescued 18 people in Sitia and 11 in the Livadia region. In the Oreino village, a whole stone house collapsed.
In Ierapetra, the heavy rainfall caused landslides along the road network, while several greenhouses and crops were destroyed. Farmers and residents are worried about their farm work and homes if the stormy weather continues.