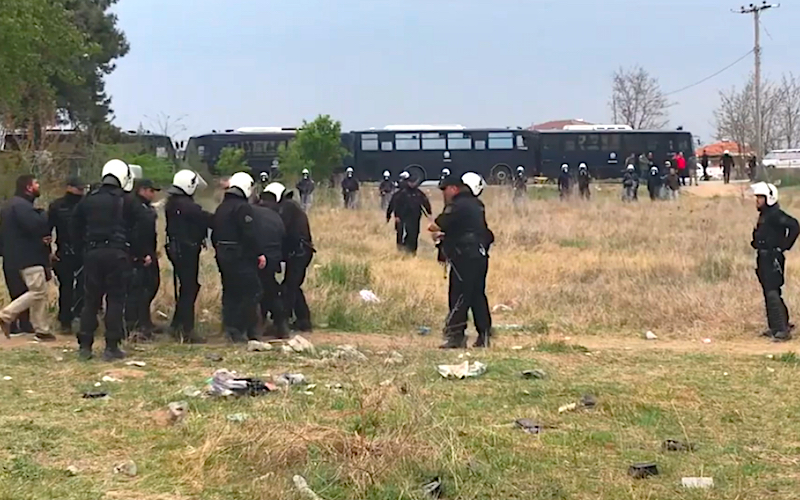 Hundreds of migrants and refugees remained at the Diavata camp for the third day, until finally they started to leave on buses. Earlier, some of them clashed with police.
On Thursday, a call on social media that the Idomeni border crossing into North Macedonia will open led hundreds of migrants and refugees to the Diavata hospitality camp, some 40 miles from Idomeni.

ANT1 television reported that the message had the title “The caravan of hope” and read as follows: “We will not wait for anyone. Since some of you may not have proper documentation, be aware that some may try to block you. We are in contact with humanitarian organizations that have offered to gather in Thessaloniki and help us. We will notify you about the collection point 24 hours before we start.”
Sit-in protests in Athens and Diavata continued for the third day, while on Thursday and Friday some of the asylum seekers clashed with police trying to break through police lines in a bid to reach the border. Riot police responded with stun grenades and tear gas.


Again on Saturday, some asylum seekers threw rocks at police and tried to break police lines that blocked the way to the border. Police responded with tear gas and stun grenades. During the fights a photo-journalist was injured.
The Minister of Citizen Protection Olga Gerovassili spoke on News 24/7 radio station on Friday and said that the borders will not open. She advised protesters to not risk their privileges and not use their children as shields because some traffickers have sold them false hopes.
Migration Policy Minister Dimitris Vitsas reiterated that the borders will not open. Speaking to the Athens News Agency, the minister said that he has made a joint appeal with the UN High Commission for Refugees, the International Organization for Migration (IOM) and other international organizations in six languages telling asylum seekers that the announcements they heard were lies.
Finally, after negotiations refugees and migrants agreed to leave the makeshift camp. According to regional coordinator of Northern Greece and Epirus of the Migration Policy Ministry, Nikos Rangos, it is estimated that about 300 people have already left or are waiting for chartered buses to return to the hospitality facilities where they were hosted.