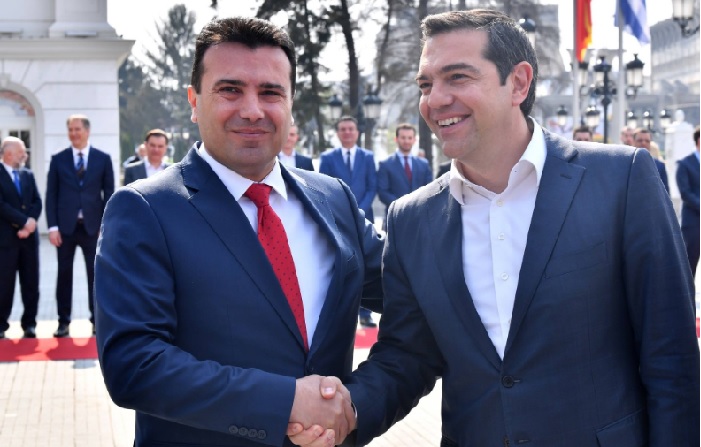 The Greek Prime Minister Alexis Tsipras is visiting Skopje on Tuesday, in the first official visit of a Greek Premier to the newly-named country of North Macedonia.
Tsipras’ visit to Skopje inaugurates a new era in relations between Greece and North Macedonia, following the ratification of the  Prespa Agreement.
A visit described as “historic”, marking a new beginning in a wide range of sectors such as diplomatic, military, economic, and energy, is set to begin.
Tsipras landed at the airport of Skopje at 09:45 local time (08:45 UTC) and was welcomed by the Defense and Economy ministers of the country.
The Greek Prime Minister then headed to the Government building of Skopje where he was received by North Macedonia’s Premier, Zoran Zaev.
Zaev surprised the Greek Premier when he asked him to take a few selfies together.


Apart from the large governmental delegation, Tsipras is accompanied by at least 140 Greek businessmen, among whom are prominent members of the Greek business elite.
The two sides held talks about a wide range of agreements on co-operation between the two countries.
Greece and North Macedonia are in the process of building a “new narrative” based on “solid foundations” stemming from the name deal signed between the two neighbors last year, Tsipras said.
Further initiatives to bolster ties that were agreed between the two leaders, Tsipras said, include inaugurating diplomatic missions in the two capitals, the creation in Greece of a “National Organization for Balkan Development,” a joint committee to address the contentious issue of trademarks and branding, a new open border crossing, more intensive talks on defense cooperation within the framework of NATO, and regional cooperation with other Balkan countries including Bulgaria, Serbia and Romania.
“A few years ago, to convene a High Cooperation Council between the two countries seemed impossible. Today it is becoming a reality as we are signing a series of important memoranda and agreements and an action plan that covers almost all sectors of cooperation between us,” Tsipras said.
Ahead of the visit, Zaev told AFP there would be new Greek investments worth more than 500 million euros in North Macedonia, which is much smaller and poorer than its EU-member neighbor.
“The Republic of North Macedonia will have huge economic benefits from the deal that I believe will be seen in every area of the economy,” the prime minister added.