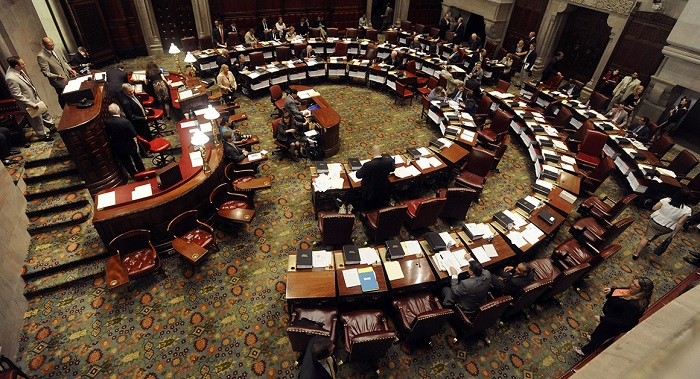 The resolution, put forward by Senate Deputy Leader Michael Gianaris, also encourages the citizens of New York to reflect upon the contributions of the Greek community on the 198th anniversary of Greek independence.

Gianaris stated “As the son of Greek immigrants, I am proud of all the Greek-American community contributes to the cultural, social, and political life of New York State.”

During a speech at the Senate, Gianaris noted: “We claim credit about a lot of things about Western civilization, including our democracy which allows us all to be here today representing our districts and our communities… Western civilization owes much to the history of the Greek people, not only from the ancient times but also in the modern era.”

Senator Gianaris is the first Greek-American to hold elected office in the City of New York. The senator hosts a celebration of Greek Independence Day with local Queens leaders every year.

The full text of the resolution:

MEMORIALIZING Governor Andrew M. Cuomo to proclaim
March 2019, as Greek History Month in the State of
New York, in conjunction with the commemoration of
the 198th Anniversary of Greek Independence

WHEREAS, The year 2019 will mark the 198th Anniversary of Greek
Independence; and

WHEREAS, The Greek people proudly trace their heritage back
thousands of years in Europe, where they developed an advanced
civilization unlike any the world had yet seen; and

WHEREAS, Upon the fall of the City of Constantinopole in 1453, the
Greek people began almost four centuries under foreign rule in the
Ottoman Empire; and

WHEREAS, In March 1821, the yearning for Greek independence inspired
multiple militias to engage in battles against the Ottoman Empire
including an incursion into Moldavia led by Alexandros Ypsilantis, and
various skirmishes in the Peloponnese, and on several islands; and

WHEREAS, On March 25, 1821, Bishop Germanos of Patras raised the
Greek flag at the Monastery of Agia Lavra in the Peloponnese, marking
the beginning of the war for independence; and

WHEREAS, In January 1822, the Greeks officially declared
independence from the Ottoman Empire; and

WHEREAS, The Greeks valiantly waged war against their Ottoman rulers
under the brave leadership of Theodoris Kolokotronis for almost nine
years until a part of modern Greece was declared independent; and

WHEREAS, The war of independence was formally concluded in 1832 with
the signing of the Treaty of Constantinopole, further expanding the
borders of a modern, independent Greek state; and

WHEREAS, March 25th is celebrated as Independence Day in Greece and
in Greek communities around the world, commemorating the beginning of
the war of independence; and

WHEREAS, Throughout history, the Greek people have exhibited an
enduring sense of bravery in rising up against oppressors; with Winston
Churchill noting in a famed World War II speech that “Until now we used
to say that the Greeks fight like heroes. Now we shall say: “Heroes
fight like Greeks;” and

WHEREAS, Ancient Greece has shaped modern society by originating the
concepts of Logic, Science, Lyrics, Philosophy, and History as well as
being the birthplace of democratic ideals, inspiring the notion of
participation in government which influenced the framing of the United
States Constitution; and

WHEREAS, Greece has continued to enrich our culture in the fields of
literature, philosophy and architecture, and has promoted the modern
Olympic Games, hosting the first in 1896 and most recently in 2004; we
also honor Greek-Americans in New York who have improved our community,
shown love for family, and shared with us their traditions to learn and
celebrate; and

WHEREAS, The great State of New York has been blessed in many ways,
including through the presence of the Greek Orthodox Archdiocese of
America; it serves as a beacon of moral and ethical guidance throughout
the hemisphere from its Manhattan headquarters; and

WHEREAS, The State of New York is further enhanced by its
long-standing partnership with the Federation of Hellenic-American
Societies, which continues its tradition of strong leadership within the
Greek-American community; and

WHEREAS, It is the sense of this Legislative Body to recognize those
New Yorkers of Hellenic descent for their enduring contributions to the
educational, social, moral and economic principles that are so deeply
ingrained in the fabric of our country and State; now, therefore, be it

RESOLVED, That this Legislative Body pause in its deliberations to
memorialize Governor Andrew M. Cuomo to proclaim March 2019, as Greek
History Month in the State of New York, in conjunction with the
commemoration of the 198th Anniversary of Greek Independence, and to
publicly encourage the citizens of New York to reflect upon the
contributions of the Greek community; and be it further

RESOLVED, That copies of this Resolution, suitably engrossed, be
transmitted to The Honorable Andrew M. Cuomo, Governor of the State of
New York, and His Eminence Archbishop Demetrios, Primate of the Greek
Orthodox Church of America.